Today, 3rd Regt. Advanced Camp Cadets had to do just that when they faced the 64-foot Rappel Tower here at Fort Knox.

It might have been wet and raining before hand, but that did not stop Cadets from overcoming this monstrous obstacle.

Before making their way up the tower, Cadets learned how to properly tie a swiss seat so they could go down the wall safely.

Once cadets get up to the top, they must tell the rappel master which is their break hand, this is a Cadet’s dominant hand.

After this they take a knee and wait for the Cadre to lock the rappel rope into their carabineer. Once locked in and the lane is clear, a Cadet yells to the belay which lane they are about to rappel down. The belay responds with the lane number they are at to assist.

Before rappelling, Cadets place their break hand at their lower back, sometimes Cadets put their hand up at their kidney, and that is incorrect. 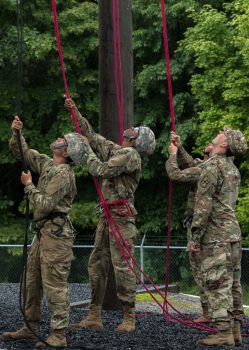 After rappelling down the 64-foot tower, 3rd Regiment Cadets belay for other Cadets that will rappel down the wall or free-fall at Fort Knox, Ky., June 17. | Photo by Matthew Billiot, CST Public Affairs Office

Once the Cadet gains good control with their break hand they lean back over the edge of the tower and with one quick step they are on the wall.  Before descending down the wall, Cadets get in a “L” shape position, and then push off the wall to descend.

After completing the wall side, Cadets must then rappel down a free-fall side that has no wall, simulating rappelling out of a helicopter.

Weyhrauch, who aspires to go Infantry, said he prefers the free-fall side because he can just kick off and rappel. Weyhrauch said that this was a refresher for him, because he went to air assault school last year. Although, there he rappelled out of a helicopter.

It may have been challenging for him to remember all the steps, but “I learned to trust my equipment, and just be confident in my abilities,” said Weyhrauch.

Weyhrauch used to have a fear of heights, but has mostly conquered it. He said that his fear still lingers in the back of his head a little. 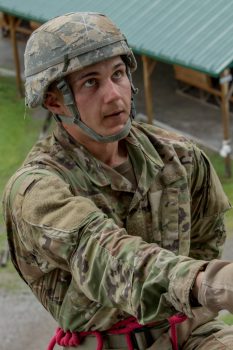 A 3rd Regiment Cadet prepares to rappel down the free-fall side of the Rappel Tower at Fort Knox, Ky., June 17. | Photo by Matthew Billiot, CST Public Affairs Office

According to Weyhrauch, this is an important skill to have because, it is something that is considered a basic soldier skill by most. “This is something that people in basic training will do, so it is important for us as officers to see what they go through and see the training that they get,” said Weyhrauch.

“Depending on what branch you go, there are a lot of times where you go you are going to be working with heights. I know some people do not feel as confident as everyone else, so this is a good way to get you over that,’ said Cadet David Marcelo, from California State University of Fullerton, who plans to go Infantry.

Marcelo was glad to do this training again, because he said it a perishable skill since it is not used often.

“The first hurdle [is] just getting over the edge,” said Marcelo, “I know people choke up especially the first time.”

Although an “irrelevant” fear, he said he is afraid that the wind may blow him over the edge when he takes a knee waiting to get locked in.

He prefers the free-fall, because of the adrenaline he gets, but said the wall is a great place to learn.

“Do not hesitate and trust your equipment,” Marcelo said to incoming and future Cadets, “Your break hand is going really going to make it enjoyable, or you are going to have a bad day.”