The Cadets did a trial run before their test because of the rain and lightning the night before.

Capt. Caitlin Moore, who oversees 5th Regiment, Bravo Company, explained the objective of Land Navigation. She said, “Out here at Land Nav, we are having the Cadets take a set number of coordinates and plot them on their map. Then navigate physically on the course to that point to collect that point, and then they bring it back and we grade them.” 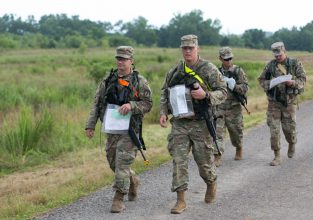 Moore also provided context for the scouting phase of the assessment. She said, “This is just a practice run, we had some bad weather last night, so we are giving them the opportunity in the next hour to go out with a buddy to go grab a point and see how they did.”

Cadet Christopher Logan, who attends the University of Tennessee and is from Morristown, Tennessee, explained his practice run process. “I basically look at the numbers and I figure out which ones will be closer to me. Since on this one specifically they told us to just find one. My point happened to be decently close, within 300 meters. If you can terrain Associate and follow the roads and are able to shoot an azimuth off of where you are going, then, if you kind of have a decent understanding of where you are at, then you can find it pretty easily.”

Logan continued to explain why Land Navigation is important, “Land Nav is, basically, the best way for a PL (Platoon Leader) to help route plan. So, for Land Nav for me it’s just really understanding where you are and where you need to go.”

Land Navigation is something that the Cadets spend a lot of time practicing for. They prepare for several months before they even step foot at Advanced Camp. 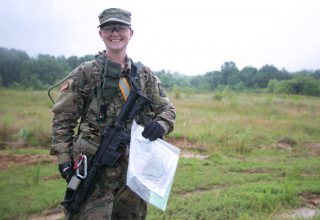 Cadet Haley Holzworth, who represents Slippery Rock University, and is from Pittsburgh Pennsylvania, said, “A lot of studying goes into before you even get out in the field. Then once you understand how to plot your points and get your GM (Grid- Azimuths) angles, and how to shoot an azimuth is important as well. You need to then go out into the field and actually prepare. So, you’ll start easy, maybe one point 100 meters out. Then slowly increase the difficulty. So FTX’s at our home schools really helped with that.”

Cadet Harrison Boyd, who attends Hofstra University, and is from Selden, New York, said the main killer is his own nerves. “Once you actually get out here, it’s not so bad if you know what you’re doing. It’s just kind of like the nerves that kind of affect your judgement, affects plotting your points, affects all the central parts of Land Nav. But once you get out here you have your pace count, you know, like your azimuth and all that stuff that you need to do.”