Fort Knox, Ky. – There is a saying in the Army that practice makes permanent, but practice also makes a leader. 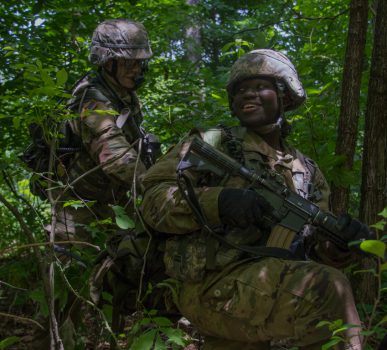 During the Situational Training Exercise (STX) 2nd Regiment Cadets learned and practiced attack and defense procedures to prepare them for evaluation.

The goal of the lane is for Cadets to learn and become proficient in the skills and procedures of attacking and defending key terrain.

Capt. Ian McBride, the Officer in Charge for the Wolverine Attack Lane, said that more important than learning basic fighting skills is the leadership qualities this training event allows Cadets to show and develop.

“What we are trying to get for the Cadets is working on the leadership traits and competencies out here that the regimental Cadre are actually evaluating them on,” McBride said. “Out here we are working on the competency trait [of the Army Leadership Requirements Model] so that the Cadets actually know the right procedures so… they can focus on their leadership traits and competencies.”

Cadet Matthew McKeon who attends Christopher Newport University said this training exercise has built his leadership by allowing him to observe others leading.

“I definitely think today has improved my leadership, not because I was a leader necessarily but because I got to watch my peers and see what works for them and what doesn’t work for them and use that as a basis for myself,” McKeon said. 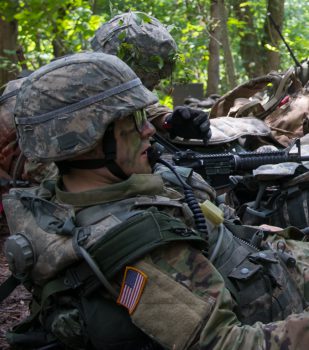 Cadets enjoyed various aspects of the training such as shooting a particular weapon and gaining a better understanding of what they will be evaluated on in the upcoming Field Training Exercise.

“I have been enjoying my time in the field so far,” Cadet Griffin Kees, from Tacoma, Washington, a student attending Pacific Lutheran University, said. “My favorite part so far is the 240s – the machine guns.”

Cadet Caroline Slyer, from Averill Park, New York, a student at Boston University, said she enjoyed the feedback on her role during the exercise.

“It was a pretty good experience so far,” Slyer said. “I was on the leader’s recon so I got to see how the wolverine Cadre wanted that to be done, which was a nice thing to have exposure to.”

McBride enjoys seeing the Cadets improve through the training exercises.

“My favorite part is seeing the Cadets start early on and since we are very much in the crawl phase and hands-on and seeing them develop as we talk through the different critical steps and having them understand what happens,” McBride said. “As the weeks progress with each regiment we get new Cadets in and seeing their progress from when they start to when they actually build cohesive teams and develop their leadership traits.”

These future Army officers are learning not only how to lead but how to lead and work on a team with others who were taught differently than they were. 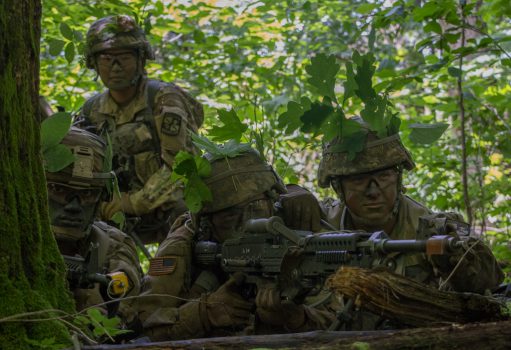 “Everyone has different levels of knowledge coming from different places so we are all figuring out what every person knows,” Cadet Sarah Lebold, from Lansdale, Pennsylvania, who is attending Tulane University, said. “Some people have all the tactics down and some people don’t so it is different for everyone.”

Griffin said that listening with the intent to learn from his fellow Cadets has served him well.

“My biggest take away from camp so far is that a lot of us were all taught generally how to do the same things but like that saying ‘there is a thousand ways to skin a cat,’” Griffin said. “My biggest take away is to listen to what others have to say because they want the same end state as you do and they just know a different way to do it.”

Soon these Cadets will graduate Advanced Camp and will use this practice to make permanent leadership skills and habits to take with them.