FORT KNOX, Ky. – Cadets from Advanced Camp, 3rd Regiment, worked as a team to complete the confidence course obstacles, June 17, to build certainty in themselves.

The course consisted of nine obstacles the Cadets must overcome. The Tough One, the Incline Wall, Low Belly Over, the Confidence Ladder, Six Vault, Swing-Stop-and-Jump, Low Wire, High Stop Over and the Weaver. 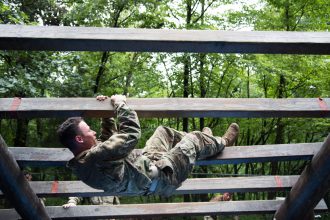 Between the Tough One and the Weaver, Cadets have the hardest time overcoming these obstacles. During today’s session, the Tough One was out of service due to weather. The Weaver still held up its reputation and challenged the Cadets physically.

A University of Central Florida Cadet, Asher Chou, said, “The hardest one physically is the Weaver, going up and down while fighting gravity, is tough.”

Cadets have to weave through the beams by going over and under to the white tape and the same thing going back down. While Chou and other Cadets were descending down the Weaver, their comrades were cheering them on an encouraging them not to give up.

“I was able to go through the obstacles with the help of my of my buddies constantly cheering me on, telling me, lets go man,” said Chou.

Many Cadets fed off of the cheers of their fellow Cadets to get through the different obstacles. Some of the obstacles like the Confidence Ladder forced the Cadets to climb high and climb back down wooden beams. For some Cadets heights is a fear of theirs.

Cadet Jeromy McKnight, who attends Texas Christian University, is terrified of heights but he pushed through thanks to his teammates. 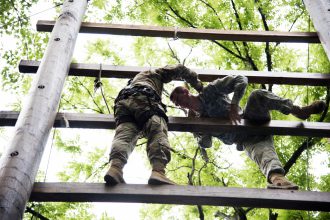 “For the Confidence Ladder, I just made sure I didn’t look down. I looked all the way up while I climbed up and when I was crossing to the other side I looked straight up all the way back down,” said McKnight.

McKnight was thankful that his battle buddies supporting him and encouraging him to overcome his fears. “I was able to over come those fears because my battle buddies gave me a lot of confidence and courage to get through it and to face my fears,” said McKnight.

A fellow Texas Christian University Cadet, Logan Gillentine, enjoyed the experience of being there for his squad. Gillentine wasn’t nervous or had any mental blocks and focused mainly on supporting his fellow teammates through the course.

“Being apart of that was awesome. Some days the morale can be pretty low,” said Gillentine. “But today is one of those days where you’re excited and hyped up about and everything around you is a positive atmosphere.”

The confidence course is built for Cadets to bond together and hype each other up. You can’t do it alone.

“Don’t psych yourself up; psych each other up, you’re only so strong yourself. You’re much stronger as a team,” said Chou.

Bands are a Big Deal

Cadets get an early start for fitness

Getting a Lay of the Land