FORT KNOX, KY. – “This training is important because, you need to be prepared with whatever the Army throws at you. You need to adapt and overcome,” said Cadet Savannah Mercado, from the University of Southern California. 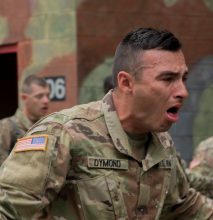 After exiting the CBRN Chamber, 3rd Regt. Advanced Camp Cadet Shane Dymond, from the University of Texas at San Antonio, flaps his arms up and down while walking and must open his eyes in order to properly recover from the chemicals at Fort Knox, Ky., June 18. | Photo by Matthew Billiot, CT Public Affairs Office

Today, Cadets from the 3rd Regiment Advanced Camp learned how to do this when they endured the Chemical, Biological Radiological, Nuclear (CBRN) chamber.

The chemical used at CBRN is tear gas; when unprotected, it specifically irritates the skin, respiratory system and eyes.

There were several different stations Cadets visited to learn how to properly don their mask and suit. “The instructors here are very informative so you take it step by step,” Mercado said enthusiastically.

While in the chamber, Cadets must successfully put their mask on in under nine seconds and their suits in under eight minutes.

According to a Staff Sgt. at CBRN,  the fastest a Cadet has been able to don his or her full gear this summer was done in two minutes and 30 seconds.

Before going through the chamber, Mercado could not stop sneezing. When she broke the seal to her mask, that quickly went away when she felt the agony of the tear gas. She called CBRN “an interesting experience.”

Being with her “people,” the Cadets who Mercado has spent day and night over the last 3 weeks, helped make her time inside the chamber pass by quickly. 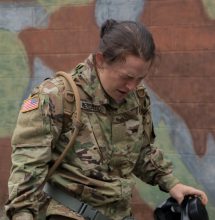 After exiting the CBRN Chamber, 3rd Regt. Advanced Camp Cadet Savannah Mercado, from the University of Southern California, flaps her arms up and down while walking and must open her eyes in order to properly recover from the chemicals at Fort Knox, Ky., June 18. | Photo by Matthew Billiot, CT Public Affairs Office

Mercado’s biggest concern was breathing after exiting the chamber. She said, “Once you get out, you want to inhale so much clean air. Then [the pain] goes away within like a minute, so it is just a mind over matter kind of thing.”

Schindler said that being in the CBRN chamber was a little bit chaotic, since everyone was coughing but, “at the end of the day you have to keep calm because you know you have safety instructors.”

The pain did not last long for Schindler, but it does not dissipate quickly for all.

According to Schindler, “in this day in age, we face more and more chemical warfare like what was experienced in Syria. We have to keep our Soldiers trained for that situation if the enemy uses chemical or biological weapons on us we are fully prepared to deal with that situation.” 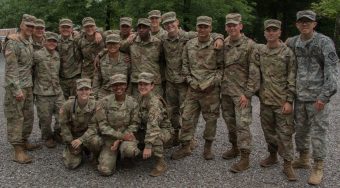 It was easy for Schindler not to stress about CBRN, because he has experienced it in the past, so he knew what to expect.

The only apprehension Schindler had was about the length of time he would have to be in the chamber. He said he had heard of Cadets being inside for up to 15 minutes, but he was only in there in a few minutes.

He said it is normal to feel burning on your neck before breaking the seal, but that is completely normal, and to remain calm.

“I do not think you can prepare for this at your home unit, but you will receive all training here [at CST at Fort Knox,]” said Schindler.

To future and incoming Cadets, Mercado said, “Trust your gear, trust your instructors and fight on.”

FTX Marks Beginning of the End for Basic Camp