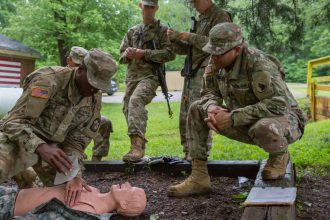 Staff Sgt. Christopher Jackson, of the 3-414th Training Battalion, noted on one of the injuries the Cadets may be faced with in the field is a hemorrhaging femoral artery, a major vessel that carries blood through the thigh. Should this happen the casualty has approximately 60 seconds to live.

Cadets are given several demonstrations and chances to see how to deal with this kind of injury so that in the field it becomes second nature. This second nature understanding, or muscle memory, was something Jackson focused on.

“In the military, we train repetitiously to develop muscle memory,” Jackson said. “When you deploy you don’t necessarily get much sleep or food, so if you don’t have the proper mindset you can rely on muscle memory.”

Making sure the Cadets understand how to identify, treat and monitor casualties in the field like this is the main purpose first-aid training. No matter the skill level the Cadre want to make sure Cadets know the steps like the back of their hand.

Cadet Joseph Holbrook of Fredericksburg, Virginia, came to this training a little nervous because he had done first aid training before but, as he said, “Everything here today was at a higher level of knowledge that we got to learn.”

However, thanks to the rest of his platoon and the Cadre, Holbrook found the confidence to take on the testing. 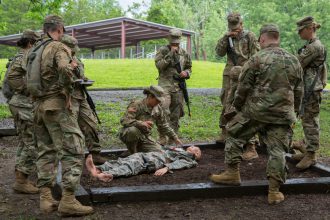 “We had a great group of guys. As we got to know each other, it took all the anticipation and leveled my ease,” the University of Alabama in Huntsville Cadet said. “And the Cadre here are super supportive. Everything we do here, they show us the way to do it, and then we perform it. It’s done in a crawl phase, a walk phase and a run phase so that even the guys who don’t know the subject that well, have people with an insider look and can help them figure it out.”

All of the repetition, as Holbrook said, did help newcomers to first aid training, newcomers like Cadet Vanessa Garcia, from Prairie View A&M University. Even with that steep learning curve to climb, she still came out with a first time go, or pass.

She also made sure to let future Cadets know that even if you haven’t learned first aid before to not worry.

“Don’t be nervous because the Cadre will walk you through step by step,” the Houston, Texas, native said. “If you have any questions, they will be right there to help you.”

This training wasn’t just helpful for newcomers, but also those who have had extensive training before Advanced Camp.

Shelby Pitts, a prior enlisted soldier and Cadet from the University of Alabama at Birmingham, had been at Advanced Individual Training to become a medic as part of her time in the National Guard.

“So, I was looking forward to this training the most out of everything,” the Birmingham, Alabama, native said. “I felt pretty confident but some of the things here were different, just because this is basic aid rather than medic school. I also really liked helping people who may not have been as confident going into the training.” 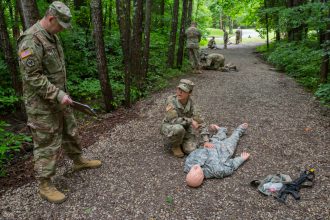 Every step of this training is set up to help all Cadets be able to make that move and save someone’s life whether they have had extensive training or not.

No matter the branch and no matter the station this training is here to help people, a sentiment one Cadet, Levon Gevorkian of Glendale, California, expanded on in much better detail.

“Whatever you do in the Army you have to remember that you are a rifleman first,” the UCLA cadet said. “If anything should happen, you need to be able to know how to take care of your people by returning fire to the enemy, but also by treating them medically. That way you can give them that time and that treatment before they are taken to an actual medical facility.”

The Cadre here make sure that no matter the headspace, stress level or time limit, these Cadets know what to do off of pure instinct to save lives.