FORT KNOX, Ky. – Cadets from the Alpha Co., 4th Regiment were hand-grenade trained today, June 18, each of them booming with excitement.

Handling and throwing live grenades is an entirely new addition to Advanced Camp.

“It’s part of a series of events that are being brought in an attempt to replicate aspects from Basic Training,” Capt. Daniel Snow, assistant professor of military science for Kansas State University, said.

The Commanding Gen. of the U.S. Army Training and Doctrine Command (TRADOC) has decided that all soldiers, enlisted and commissioned alike, should train in the same tasks, Snow said. This allows the commissioned officers to experience the same training the soldiers they will be working with go through.

For some Cadets, however, the line between enlisted and commissioned is a tad more blurred than most are accustomed to.

A Change of Scenery

“There are a lot of prior service people here, and also a lot of guardsmen and reservists who’ve thrown before,” Cadet Logan Santel, from Cedar Rapids, Iowa, said.

It’s common to find Cadets with experience in grenade throwing, Santel, who is currently attending the University of Northern Iowa, said. It’s simply because so many come into Advanced Camp with an enlisted background. From lower-enlisted to non-commissioned officers (NCOs), many make that transition to commissioned life.

“I served about five-and-a-half years in the guard before joining ROTC (Reserve Officers’ Training Core),” Santel said. “I’ve been around for a little bit, and I kind of know the Army way.”

Time spent on “the enlisted side” varies from Cadet to Cadet for those who are prior service. Santel spent over five years while others spend a year. Some are deployed immediately after Advanced Individual Training (AIT, which follows Basic Training) and, following their deployment, they need a change of pace.

“Overseas, I was a Specialist (E4),” Cadet Nick Clark, from Rineyville, Kentucky, and attending Georgia Military College, said. “I kind of just did my job; I didn’t really think about how somebody has to plan all this stuff for me to do.”

Enlisted life was fun, Clark said. He enjoyed “every bit of it,” but there’s such a change in setting on the other side of things, the mindset is completely different.

From what these prior service and reservist Cadets say, the best analogy would be something akin to enlisted is to commissioned, as water is to fire. The flow, the planning, the work is different, and the way you see the world is just as different. 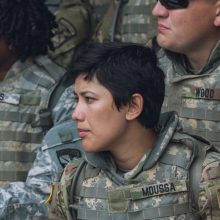 The biggest difference that Cadet Jasmine Moussa, from Rochester, New York, and attending the University at Buffalo, has really noticed is the accountability.

“As a Cadet, you have to stay accountable for yourself,” Moussa said. “But as a Pvt., you can kind of just, ‘I don’t really feel like it, I’m going to go take a nap in the latrines’ type of deal.”

The lifestyle, that’s pretty different, too, Moussa says. She notes a memory she has from her enlisted days that really stands out.

“We went to an annual training event with my unit, and, you know, we were out in the field and we were having to dig fox holes and stuff like that,” she said.

“And then I look over and I see the officers in the tent, the air-conditioned tent, planning stuff and I was like, ‘that’s the life I want.’ Not saying that officers aren’t all ‘hooah-hooah,’ you know, but they definitely can’t always be out in the scrubs.”

What I Wish I Knew Then

As with any other situation that allows for self-growth and development, the journey from enlisted to commissioned continues with the recognition of things learned.

Each prior service, reservist and guardsmen Cadet has that voice inside their head telling them, “Man, if only I knew then what I do now.”

“To know how much more goes into it really makes me appreciate the things people [Clark’s officers] did for me,” Clark said. “My squad leader, my team leader, even though they were lower level, they were doing more than what I was doing.”

That appreciation for all that officers do comes with going through Advanced Camp, Clark said. It stands out to him more than any knowledge gained at camp does.

Santel was a team leader for his infantry unit during his time on the enlisted side, allowing him the opportunity to see the inner workings of leadership. From a squad level to a platoon level, Santel has had the opportunity to work with smaller groups.

“I’ve learned a lot about the Troop Leading Procedures, Operations, Orders, kind of the bigger picture, I would say,” Santel said.

Now, coming to Advanced Camp, he’s getting the view of the overall operation, Santel said. The way a squad links to a platoon, and that platoon links to the battalion; it helps him to see that “bigger picture.”

“On the enlisted side, you’re focused on your warrior tasks, and the lower-level echelons, but now it’s more of a larger scale team force,” Santel added.

Moussa focuses not so much on what they learn in Advanced Camp, but rather the mindset she’s taken on.

Recognizing the importance of leaving that hiding spot in the background, stepping out and “putting on your thinking cap,” has definitely been something that may have benefited her enlisted days, Moussa explained.

From High to Low

Having risen the ranks in their enlisted days, all four made the decision to fall down the ladder to Cadet. It’s a big decision, and not one to consider lightly.

“It’s definitely a change, I’ll tell you that,” Mcilvaine said. “It’s something we have to adjust to.”

Despite that change, these NCOs turned Cadets are still utilizing the former trainer in them to help out those Cadets who don’t have that experienced background.

“You’re not just a student at these universities,” Holland said. “All these younger kids identify that you’re prior service as well, so in turn, that makes you just as much of an instructor as a primary instructor.”

There’s still that responsibility to help shape those Cadets that are your peers, whether in classes or at camp, Holland said. To pass on that knowledge is not only a responsibility, but also a pleasure.

After spending time climbing the ranks as an enlisted soldier, becoming a commissioned officer gives you a unique view on enlisted life.

Having that idea of what those soldiers are experiencing gives you more motivation to work with them, lead them and help them, Little said.

Mcilvaine, like Little agrees that there’s a “light-gap” between enlisted and officers. Coming in from an enlisted point of view can work to close that gap.

That gap can affect the way enlisted are treated versus the way commissioned are treated, and while that’s not always a bad thing, it is something that can be changed when one knows the background of the other a bit better.

“I think we all [her group of NCOs] have unique perspectives on how our under-enlisted will be treated because we were that at one point,” Arndt said. “Not all officers are.”

At the end of the day, a soldier is a soldier. Everyone is a fighter, working to protect this great nation we live in.

From sea to shining sea, enlisted and commissioned protect it all.

Teaming Up Against the Confidence Course | 5th Regiment, Advanced Camp

Sweaty and sticky – female hygiene in the field