FORT KNOX, Ky. – It was a nice windy day for the 3rd Regiment, Advanced Camp Cadets as they conducted their Situational Training Exercise by rehearsing Platoon Operations today. 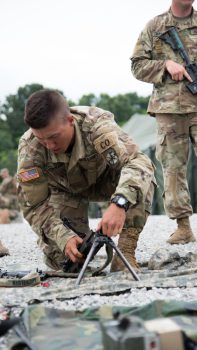 3rd Regiment, Advanced Camp Cadets participates in a relay race during Platoon OPS to see which team can disassemble, and assemble a 240, 249, and M4 and a radio. Cadet Timothy Youngs works on a 249 gun while team members’ cheer him on, June 20, Fort Knox, Ky. | Photo by Catrina Dubiansky, CST Public Affairs Office

Platoon Operations are the different combat patrols that Cadetsundertake during their upcoming Field Training Exercise.  They will spend the next 12 days living and operating in the Ft. Knox training area, the culminating event of Cadet Summer Training.

The training is not new as the Cadets practice these patrols and maneuvers on their campus during their labs and FTXs.

“We get a lot of the Situation Operations Procedures [SOPs] out of the Ranger handbook,” said Anna Coleman, a student at the University of Georgia.  ‘There’s a lot of different ways to do a mission, we all decide on one plan as a platoon, making sure everyone is on the same page.”

Cadets ventured out into the woods to practice different plans they have for the field, to make sure what they have agreed on as a platoon, they will be able to complete the mission they were given.

With nearly 40 cadets in a platoon, it is sometimes challenging for the leadership to get them working toward a common goal.

“You have roughly 40 people in your platoon who have different personalities,” said Cadet Kevin Jiang, who attends Yale University about the challenge of leading.

Jiang said that challenge along with the stress of Cadet Summer Training, both his and his platoon members, has forced him to learn about himself.

“The biggest thing I’ve learned here at Cadet Summer Training [CST] is confidence under stress,” he said.  “You are learning how to handle not only your stress but how to handle the stress of others, while motivating your platoon to get them in a good mindset.” 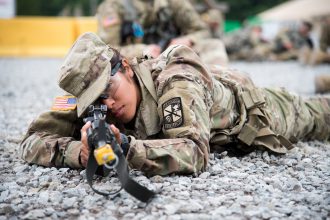 Throughout CST the Cadets serve in leadership roles, be it as a platoon leader, platoon sergeant, or squad leader.  They are evaluated on their leadership abilities in garrison and during the FTX.

“If you’re not on the same page and you go into Wolverine, Panther or Grizzly [areas of operations for the FTX] you will get destroyed,” said Coleman.  “I’m looking forward to being a PL, I like the mission, I like to be in charge of the mission instead of a being told what to do,” said Coleman.

Coleman said she thinks it is just as important to be a platoon member and not just a leader.

“You learn how to be a follower more than a leader and a good follower makes a good leader,” said Coleman.