University and company representatives from all over the nation came to Fort Knox this week to catch a glimpse of Cadet life. 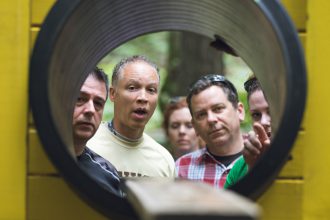 Centers of Influence (COIs) are universities and companies that the U.S. Army deems influential in the lives of the youth. These COIs are beneficial in reaching out to and drawing in potential Cadets.

Inviting them out them out to Fort Knox each year, Cadet Command allows these deans of universities and heads of companies to learn about the ROTC program and become part of it, even if only for a few days.

“These are educators, marketers, folks involved in financial education and scholarship, that are all part of the different colleges around the country,” Brig. Gen. Andy Munera, Deputy Commanding General of Cadet Command, said.

“It’s really important because it’s the partnership between the civilian education community and the military that makes ROTC such a successful program.”

After checking into their hotel, it was time for the COIs to head out to Fort Knox for their first official day of their visit. Day one was briefing day.

They learned all about the Reserve Officer’s Training Program, Military Science Levels, scholarship opportunities and the type of training these Cadets go through. From terminology to the purpose of Advanced and Basic camp, the COIs learned it all.

The Cadet Panel was perhaps the most beneficial portion of day one. COIs were given the opportunity to ask a group of three Cadets and four new Second Liutenants what they gained from the ROTC program and how it’s shaped them.

“ROTC gave me a sense of purpose,”2nd Lt. Ashton Winslow, from Highlands Ranch, Colorado, and commissioning out of Brigham Young University, said.

The other Cadets and 2nd Lts. echoed that answer, discussing how ROTC drove them to work harder and strive to be better leaders.

The family and purpose these students found in the U.S. Army’s programs was encouraging to the COIs.

“I’ve learned so much about what they [the U.S. Army] does for the Cadets and the leadership training and getting to speak with the Cadets,” Kristen Hutter, who runs corporate sponsorships and business development for the National Schoolboards Association, said. “It really opened my eyes.”

Many of the COIs were vaguely aware of the work and training the Cadets put in to be successful Army officers, but hadn’t quite known the extent of it.

“I thought it was hard, but it just confirmed it. It’s just kind of more difficult than I could have imagined,” Nicole Pride, the vice provost for academic strategy and operations North Carolina A&T State University, said. “The mental and physical strength and persistence and the courage that goes along with this kind of work.”

Day two started the COIs on their Cadet adventure, taking them to the Rappel Tower, the grenade range and the Field Leader Reaction Course. A rush for the adrenaline-seeking COIs and a nerve-wrecking day for others. 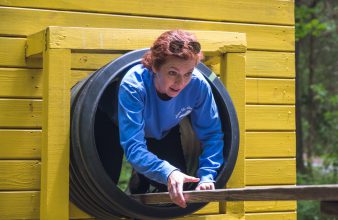 Bringing the COIs out to the courses the Cadets themselves will be training on gives them a deeper insight of the experiences those same Cadets walk away with. Knowing what it’s like to be at Advanced and Basic Camp helps them tell the story when looking to recruit prospective Cadets.

Compared to the World War II era, when everyone knew someone in the military, Munera said, we are living in a time when most people don’t have any idea of what military life is like. In the decades since the 1940s, when there were over 11 million people serving in our Army, numbers have dropped drastically.

“So, getting them exposed to what the Cadets are going through, in an atmosphere that’s like Basic Training, hearing their stories and hearing our stories, it provides being able to relate back to them and being able to convey that to the American people,” Munera added.

But learning what the Cadets do is much easier said than done.

Watching the simulations and demonstrations at the Rappel Tower left the COIs gasping and worrying for their own safety. The climb up the tower following their instructional brief was almost as terrifying as the descent down the wall.

“The rappelling was pretty adrenaline filled,” Jeremy Mack, the director of student engagement for Grand Canyon University, said. “It taught me a lot about me that I didn’t know, which was interesting, and that I did not expect.”

This week, Mack said, the work that they’ve been given the opportunity to do with the Cadets, has shown him so much that he wasn’t aware of before. The scholarship opportunities that the ROTC students are offered straight out of high school, as well as the length and intensity of the training Cadets undergo, has been an eye-opening experience.

The Field Leader Reaction Course was just as eye-opening, showing these COIs what it’s like to be a Cadet, right at the start of Advanced Camp or Basic Camp, and to be put into a squad of people you barely know and to go through an obstacle course with very little equipment.

The frustration was evident, but that showed the COIs that this event was never meant to be easy.

The third and final official day of the COIs’ visit consisted of a jump out of an airplane from thousands of feet up. 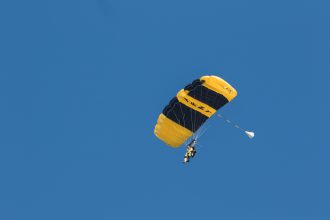 The COIs jumped with the legendary Golden Knights, each decked out in tandem gear, each gaining a memory that would last a lifetime.

Many who jumped said the beginning of the fall, that first step of the plane, was a blur. Once they were in the air, though, the beauty overtook them.

“The scenery is unbelievable, it’s pretty cool,” Mack added. “When you’re floating around, you do feel kind of like a bird, just floating through the wind drafts.” 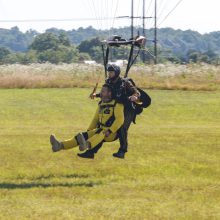 The Golden Knights are professional and fun at the same time, the COIs said. They’re great people to be around, and you feel safe with them.

“When the door opened, I thought, ‘I’m not sure I can do this,’” Jon Anderson, the dean of the college of social sciences at Eastern Washington University, said. “But the Staff Sergeant talked me through it, got to the door, no nerves.”

The COIs truly had a one-of-a-kind experience this week, delving into the world of Cadets and finding out just what it us they do.

“It’s given me a lot more ammunition for when I go into the schools, and what to talk to them about,” Hutter said, preparing for her return home, where she plans to do more outreach to students about ROTC.

More than that, it’s allowed the COIs to reflect on what the military does for them and their nation.

“We should always and consistently thank our leaders, and our future leaders, for their service,” Pride said.