The six-mile ruck march is a must pass event. Cadets still in the running for Reconnaissance and Commando badge, RECONDO, had to finish the six-miles within an hour and half. For the others their time must be under two hours.

“I finished in an hour and ten minutes but I’m not in the running for RECONDO anymore, land navigation got me,” said Cadet William Norman who attends University of North Georgia.

Cadets carried roughly 35 lbs. on their backs making the six-mile ruck march a mentally challenging event. Some Cadets were brave and left some extra weight in their rucks.

“When they weighed my ruck it came out to 40 lbs,” said Gosselin. “I just left it because I didn’t want to take things out of my ruck and pack them away and risk loosing them.”

That weight causes fatigue to set in and causes the Cadets to second guess their will power.

“Having a battle buddy helps tremendously, when you kind of start second guessing yourself, they are there to push you forward,” said Gosselin. 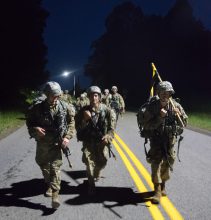 Cadets get their motivation to continue from the people around them, like Cadet Norman and Cadet Larson, who marched together and motivated each other through the six-miles.

“My motivation was definitely my platoon. Everybody in my platoon especially Larson, he is a guy in my platoon, were pushing each other and we finished together,” said Norman.

Even though Cadets carry their own weight, they don’t have to complete the ruck alone. Cadet Nathan Hicks who attends University of North Georgia is a firm believer in working as a team.

“Don’t get caught up on individual success because it’s not just about you,” said Hicks. “If you’re worried about the person to your left and your right, everything will go smoothly and everyone will be better for it.”