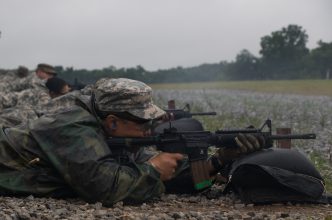 Group and Zero is just one day in the four-day process of basic rifle marksmanship training.  It falls after primary marksmanship instruction and is the first of three days with live ammunition.

Cadets make adjustments to the weapon based on the location of hits on a paper target 25-meters away.

“Grouping is allowing a tight niche of bullets that go through the same directional path and not having too much deviation from your original target,” said Cadet Wynnjones Mbwambo, from Eastern Kentucky University.

“Zeroing is getting the bullets in the middle of the target where the silhouette is so you’re not all over the map,” said Cadet Ryan Redilla,  who attends Indiana University of Pennsylvania.

Cadets are taught different techniques to use while they are shooting. One technique is just to breathe normally and not pull the trigger on the lowest point of their breath.

“The chest ventilation technique really helps with our breathing and site picture,” said Mbwambo. “One sergeant told me ‘you weren’t taught to breathe, just breathe naturally’ that took me a minute to adjust to. I’m so use to pulling the trigger on the lowest point of my breath.”

Beside the breathing technique many Cadets received guidance on how they should line their bodies up with the target for a more accurate shot.

Cadre walked with the shooter to the target after each round to examine the last group of bullets. Cadre would then tell the Cadets what they needed to change with either their weapon or their body position. 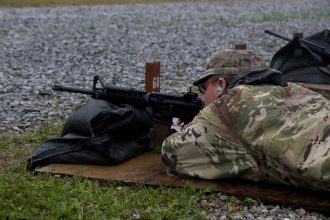 For Cadet Jayden Peck, who attends Utah State University, some individual instruction helped him focus after he started firing off target.

“At first, they said I had a pretty good grouping, and then in the middle I had a bigger spread,” said Peck. “An infantry sergeant gave me a one-on-one lesson and all of a sudden I was hitting dead center.”

Peck shared his newfound knowledge with other Cadets.  The student becoming the teacher.

The infantry sergeant also told Peck to relax and let his body do the work.

“One of the things he told me was you find your target, close your eyes and breathe a couple of times and when you open your eyes and your right on the target,” said Peck.

All of this gained insight, he hopes leads to a first-time ‘Go’ when he qualifies with his regiment early next week.

Get On My Level