The first round of Cadets were beginning to shoot as the storm rolled in putting a temporary halt to the range activity.

“It was pretty bad weather before, we did not know if it was going to be canceled or not,” Cadet Mitchell Sanford, from Lagrangeville, New York, and a student at State University of New York Cortland said.

A few hours later the storm passed and weapons qualification carried on as normal, in bright daylight.

“This is basic, every solider needs basic marksmanship skills and to get some practice because whether we are sent to the front lines or not, our number one job is to be soldiers, leading in the fight,” Cadet Nathan Cayangyang, from Ledyard, Connecticut, a student at the University of Connecticut said.

The 5th Regiment Cadets shot with the goal of qualifying and ultimately commissioning as second lieutenants in the Army.

Cadet Christopher Manning, from Orlando, Florida, attending the University of Central Florida, said this was his first time shooting on a pop-up target, and was grateful for a passing score. 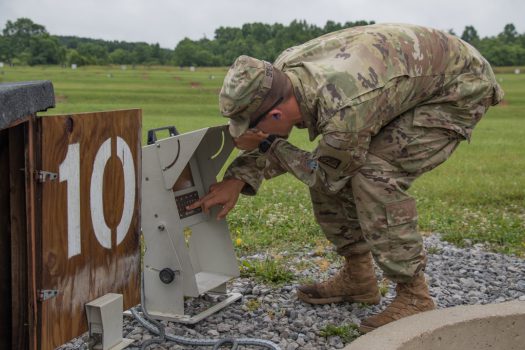 Cadet Speas signs into the pop-up target system during 5th Regiment’s weapons qualification on June 22 at Fort Knox, Kentucky. In order to qualify with a weapon, Cadets must successfully shoot at least 23 of 40 pop-up targets. | Photo by Reagan Zimmerman, CST Public Affairs Office

“It was my first time on a pop-up range and I was shooting too high but I adjusted my second time. I was happy when I qualified,” Manning said.

Manning was not the only Cadet excited to receive a qualifying score and become one step closer to commissioning.

“It is important for me to achieve this because it is one of the many steps and things we have to do to complete Advanced Camp,” Cadet Mariah Rouse, from Fort Valley, Georgia, who is attending Fort Valley State University said.

“I was really, really, happy. It is another burden taken off my chest and I am getting closer and closer to walking across that stage,” said Sanford. 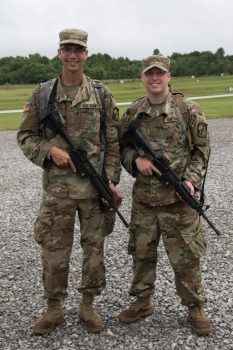 Cadet Christopher Manning, from the University of Central Florida, and Cadet William Keenan, from Texas State University, pose for a photo after successfully qualifying with their weapon on June 22 at Fort Knox, Kentucky. | Photo by Reagan Zimmerman, CST Public Affairs Office

Another Cadet, William Keenan, from San Antonio, Texas, who attends Texas State University said that qualifying and continuing on to become an Army officer means even more to him as he carries on a family legacy.

“I grew up watching my parents do it for over thirty years,” Keenan said. “I think it is a great environment and great community. I want to stick around for it, it is all in the family business I guess.”

Shots in the Dark