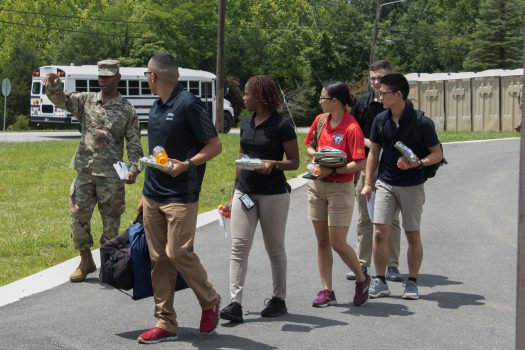 Cadets arrive at Fort Knox, Ky., for 7th Regiment, Advanced Camp, on June 22. Upon arrival, Cadets are briefed, assigned to a platoon within their regiment and have their gear checked. This is the first step before they begin the next thirty-seven days of training. | Photo by Shelby Cusick, CST Public Affairs Office/eckosc_tab_container]

The overall goal over the next thirty-seven days is to assess each Cadet’s basic leadership qualities.  However, many Cadets arrive at Advanced Camp with different military backgrounds and leadership experiences, allowing them to excel in certain events.

Tlessie Hollis, a Cadet from Pacific Lutheran University, spent the past twelve years as a unit supply specialist in the Army.  “I had recently picked up Sergeant 1st Class, and then I realized that I wanted to do something different. I wanted a different challenge,” explained the prior enlisted Cadet. 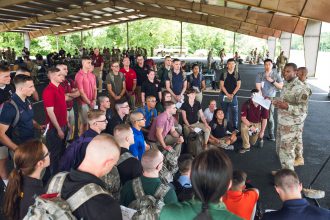 Cadets from 7th Regiment, Advanced Camp receive their initial brief after arriving at Fort Knox, Ky., June 22, 2019. On day zero the cadets are inprocessed and checked to make sure they have all the necessary clothing and equipment. They are also assigned to a platoon that they will spend the next thirty-seven days of Cadet Summer Training with. | Photo by Kyle Gallagher, CST Public Affairs Office

Unlike Hollis, Cadet Nicholas Davis, from the University of Massachusetts, begins CST with experience solely from his ROTC program.  Although he has no prior enlistment knowledge, Davis is confident in the training his school has provided and is eager to see how far he’s come since beginning his ROTC journey.

During CST, Advanced Camp Cadets are expected to complete events such as a 12-mile ruck march, rappelling off a 64-ft. tower and successfully throwing two live hand grenades. For Hollis, land navigation is an event she struggles with, but she is aware of this weakness and has practiced extensively before arriving at Fort Knox. “I’m really excited to get out there and put what I have learned to the test,” said Hollis.

Davis anticipates the Field Training Exercise (FTX) and getting the chance to be able to run lanes.  He explained, “At school when we do them [FTX], they’re limited to just a day or two. So, to have the chance to be with a platoon for days or up to a week at a time, I think is going to have a lot of training opportunities.”

Cadet Jamar Gilyard is in a Master’s program at Fort Valley State University.  After completing his degree in Criminal Justice, Gilyard planned to enlist in the Army and become a military policeman.  Instead, Gilyard enrolled in graduate school and joined ROTC as a means to help pay for it. He soon realized how impactful his Cadre and the program as a whole was on him. 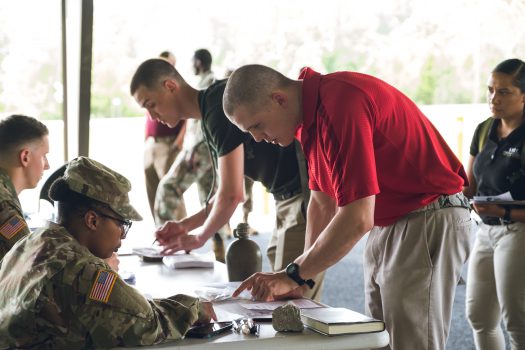 Cadets from 7th Regiment, Advanced Camp check in after arriving at Fort Knox, Ky., June 22, 2019. On day zero the cadets are inprocessed and checked to make sure they have all the necessary clothing and equipment. They are also assigned to a platoon that they will spend the next thirty-seven days of Cadet Summer Training with. | Photo by Kyle Gallagher, CST Public Affairs Office

“It’s an amazing opportunity. After I joined, I think I became a better man.  Discipline, order, cleanliness, patience and just being comfortable with being uncomfortable are all traits I acquired,” said Gilyard, who completed Basic Camp at Fort Knox last year.

Something Gilyard struggled with at Basic Camp was completing land navigation and climbing the rope on the confidence course.  Like most Cadets, the fear of not passing an event is something that remains in the back of their mind.  “I just don’t want to fail anything,” said Gilyard.  Although Gilyard is nervous, he reminds himself that his school’s Cadre and the Cadre at Fort Knox are supportive, and confident that he will do just fine. 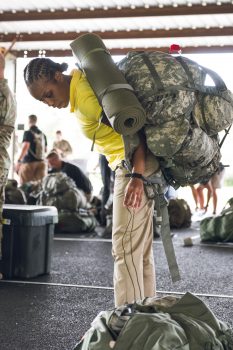 Cadet Tlessie Hollis from Pacific Lutheran University moves her gear after having it checked during her arrival at Fort Knox, Ky., June 22, 2019. On day zero the cadets are inprocessed and checked to make sure they have all the necessary clothing and equipment. They are also assigned to a platoon that they will spend the next thirty-seven days of Cadet Summer Training with. | Photo by Kyle Gallagher, CST Public Affairs Office

Somewhere between Hollis and Davis, in terms of past experience, lays Cadet Richard Parlato.  Now an ROTC Cadet from the University of Vermont, Parlato has four years of Infantry experience in the Army.

He explained that his goal was always to become an Army Officer, saying, “When I did my research, everyone told me that the best Officers were prior enlisted, and I’ve been career minded since the onset. So, I wanted to give myself the best foundation that I could.”

Parlato expressed that he was prepared and excited to fine tune some of his skills.  “It’ll be fun because this is probably going to be my last chance to do my job as a [Non-Commissioned Officer], even though I’m not acting as one right now, but to mentor other soldiers around me will be one last HOORAH to my enlisted career,” Parlato expressed.

Each and every Cadet, from every Regiment, comes with their own experiences.  Whether you have years of enlistment knowledge like Hollis and Parlato, or you’re just beginning your path to becoming an Officer, like Davis and Gilyard, CST will bring leadership qualities out of everyone.  For the next thirty-seven days, these Cadets will train together as the 7th Regiment, regardless of where they came from.