Perspective.  A term that Cadets Teata Gutierrez, Michael Bock, Kendra Curtice and Calvin Dally used often when reflecting on their trip to Latvia through the Cadet Coalition Warfighter Program (CCWP); previously known as the Cultural Understanding and Leadership Program (CULP).  Gutierrez, Bock, Curtice, Dally and thirty-nine other Cadets travelled to Latvia as part of the CCWP. There, they immersed themselves into Latvia’s military infrastructure, European history and culture.

U.S. Cadets interacted with Latvian military personnel at Camp Adazi and the NCO Academy.  At the academy, U.S. and Latvian Cadets were grouped together and given a mind or strength obstacle, comparable to the Field Leadership Reaction Course and strength training Cadets must complete during their time at Cadet Summer Training.

“So, the Cadets who were in the mind obstacle course were given a certain amount of time to complete a riddle or tasked with getting an item to the other side of a course,” explained Bock, a student at Wofford College in South Carolina. “The strength test was more like carrying a log 100 meters back or doing buddy carries.” 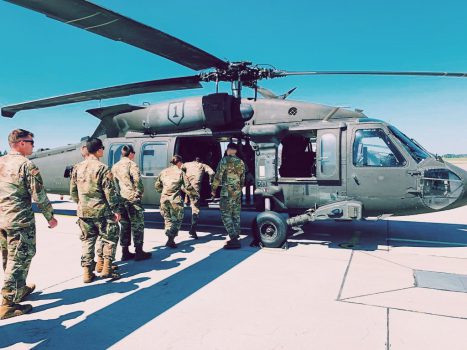 Bock continued to discuss the obstacles and how he thought they brought his team together as a unit.  However, he thought that the instructors had not discussed the rules and logistics behind the obstacle courses, often times not telling the teams time limits or requirements teams needed to consider in order to complete the exercise.

Gutierrez, from Azusa Pacific University, also noticed some differences between the Latvian military and U.S. military pertaining to Cadet missions.  “In the US, when we do land navigation we make sure that there’s support, water points and people out there making sure Cadets don’t get lost,” said Gutierrez. “In Latvia, they just sent us out without having a call-time back.” 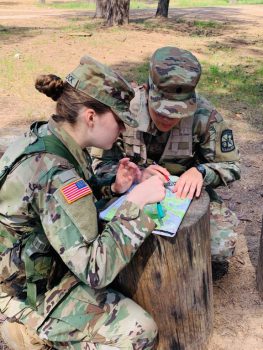 Curtice noticed the difference in expectations between female and male Cadets.  She explained how the Latvian Cadre only expected U.S. female Cadets to complete ten pushups, while their male counterparts were required to do twenty-five.  “I’m sure all of us females took it upon ourselves to do twenty-five pushups because we hold ourselves to the standard of males. “ said Curtice, who attends Northern Michigan University. “We believe that we are equal. Everywhere you go [in Latvia], you noticed how females are fighting to rise above.”

Although there were some differences in the way the U.S. military approaches training compared to the Latvian military, Dally was more focused on seeing the many different nations interact together.  “We were able to fly with an American Black Hawk on a joint base with the Latvians. It was a neat experience to see the control tower and be able to interact with the Latvian firefighters as well as the American mechanics and pilots,” expressed the Cadet from Utah Valley University.

Like many people, Bock had never met anyone from Montenegro, Albania, the Czech [Republic], or Slovakia, and was excited for the chance to interact with military units from different countries.

“You get there and there’s all these people, all in this one place, ready to stand together, fight together, and I just think it was really amazing to meet and see all these people coming together for a common cause, even though we live thousand and thousands of miles away from each other,” said Bock.  “It really just puts the world in a lot bigger perspective. Even when we have all our own issues to deal with, you can see that everyone is willing to put that aside to come together.”

Gutierrez had similar feelings when reflecting on her time spent at Camp Adazi, saying, “I think the most impactful part for me was seeing all the NATO forces all together in one place. My team was able to hang out with the Canadian forces and we had an awesome interaction with the Spaniards. One of our Cadets, Evan Schaefer, was able to translate what the Spaniard was saying to us and it was an awesome connection.” 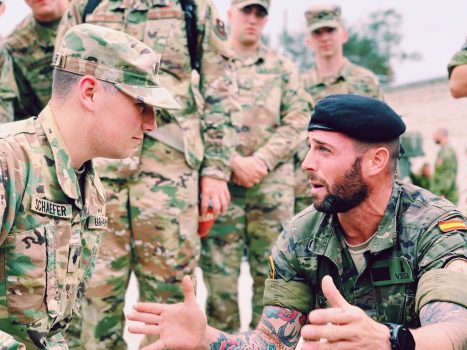 During their time in Latvia, Cadets were given the chance to visit the KGB Museum.  Here, they witnessed the cells that Latvians were crammed into by the KGB Russian Mafia.  As late as 1991, anyone who was outspoken about his or her religious beliefs, protested, or even had a parking ticket, was brought to this building by the KGB. 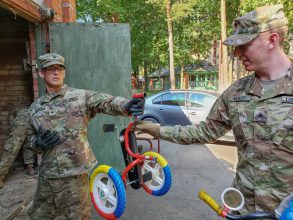 “We went to a room where there were bullet holes and that’s where they executed people. There was a drain on the floor that was built into the building on purpose to let the blood drain out of the room,” explained Dally.

Bock explained how the KGB Museum and other monuments seemed to differ from the Riga Ghetto and Holocaust in Latvia Museum, another stop on the trip for the Cadets. According to Bock, it appeared that the Holocaust Museum was less visible, “That’s a part of history that the Latvians had participated in and something that they try to shun and keep out of public eye.” 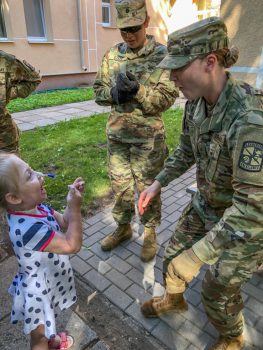 By having the opportunity to partake in community service activities, these Cadets were given a chance to get to know some of the locals and better understand their way of life. Some groups helped dig a trench for a new sewer pipe at an orphanage, while others spent time with disabled children.

“It was great way to reinforce one of the Army values, which is selfless-service.  It helped me learn that love can go beyond language through action, and helped me understand that there are humans who care for others.  It made me want to become a better person,” said Dally.

The four Cadets agreed that the people of Latvia were a very hardworking, strong and independent people.  “They are definitely…patriotic people,” explained Bock. “You couldn’t miss that. They are ready to die for their country in a heart beat.”

Though experiences differ for each individual Cadet, some were pushed outside their comfort zones and had to adapt to a new environment.  “Being submerged in something like that really pushes you to learn faster and understand more.  As the Army, we support and we work with many other countries,” expressed Curtice.

Each Cadet expressed how this trip opened their eyes and allowed them to view the world from a new perspective. “As a Cadet, taking this forward and commissioning as lieutenants, my eyes have been opened to how important our relationships are with NATO partners because we protect each other from other countries that want to do ill. It’s important to be culturally sensitive to their norms; I think being sensitive about that could help us be successful,” said Dally.