FORT KNOX, Ky. – Cadets of the 5th Regiment, Alpha Co., Advanced Camp made their way to the Woods II Range this morning, June 25, for their first day of Buddy Team Live Fire training.

For many of these Cadets, this event is their first time moving while they fire. Most are accustomed to a pop-up range or unmoving paper targets. Both options allow the Cadets to be still on the lane. 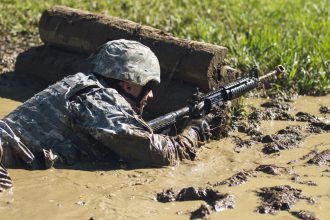 The first day consists of a run using blanks rather than live ammunition.

“This was really something new for me,” Cadet Spencer Rapp from Eastburn, New York, and attending Clarkson University, said. “We don’t typically do much movement with blanks and firing with blanks.”

Buddy Team Live Fire utilizes movement. Cadets, in teams of two, take turns maneuvering their way down the lane, covering their battle buddy while they move.

The “buddy team” is the smallest unit the Army has. This chance to work in a buddy team only helps these Cadets prepare for their future as Officers.

The lane itself consists of two series of “waterfall” wood boards and logs set in place so the Cadets can use them for cover. The obstacles zig zag down the range. This ensures that the training simulates as realistic a situation as possible.

While this may be a new experience, most of the events are not so new. The universities these Cadets are coming from work hard to prepare their students and future U.S. Army Officers for Advanced Camp.

“They do a great job, I think,” Cadet Jarod Check, from Sarver, Pennsylvania, and attending Robert Morris University, said. “For our MS3 year, right before we leave to come here [Advanced Camp], we have to do a 12-mile ruck. We do land navigation all the time.”

Check went on to discuss other events put on by his university’s ROTC program in preparation for Advanced Camp. Land navigation, weapons qualifications, Call for Fire and Field Training Exercises are all done during the school year, regardless of whether or not the Cadet will be attending camp the following summer.

Rapp said his ROTC program at Clarkson University ensures that all MS3s qualify on Basic Rifle Marksmanship before going to Advanced Camp. They also put them through land navigation courses, as well as the ruck marches and Call for Fire courses.

“We do Basic Rifle Marksmanship, we do the rucks,” Cadet Amar Misimovic from Atlanta, Georgia, and attending the University of Georgia, said. “A lot of it is tactics focused. We do the Ranger Challenge and a paint ball lab that’s tactics oriented.”

While the weapons ability and accuracy gained from Basic Rifle Marksmanship training directly aids them in the Buddy Team Live Fire event, the other training opportunities at the Cadets’ universities also translate into success on this range.

From the communication developed in Field Training Exercises to perseverance during a foot march, there are characteristics and skills earned that will serve to help them in many different areas.

Not to mention the weapons ability and accuracy gained from the Basic Rifle Marksmanship training that will directly aid them in the Buddy Team Live Fire event.

The variety of events university ROTC programs are able to put on in attempt to prepare their Cadets may be a long list, but the longer it is, the more beneficial it is. When Cadets are able to come into Basic and Advanced Camp already fit to complete the tasks set in front of them, it just increases their likelihood of success.

Being able to master these skills before they’re officially tested on them at Advanced Camp also works to build a Cadet’s confidence in their abilities.

And in the end, confidence is key.