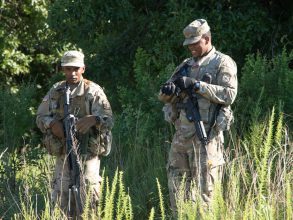 SOPs are the guidelines each platoon follows during each exercise.

Platoon leaders are given an Operation Order which include details of the mission at hand. With the description, the platoon leader and their team of people will develop a plan to successfully complete the mission.

Theoretically the success or failure of the mission is based on how well the platoon is prepared with their SOPs.

Cadet Jacob Drobney, who attends the University of North Georgia, describes what the planning process will consist of for he and his team.

“We’ll create a terrain model that will consist of what the terrain will look like when we go out there. We’ll create routes, and we will create the actual ambush [explaining] what’s going to happen and who’s going to be doing what,” said Drobney. 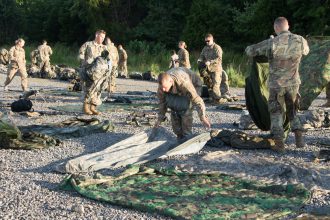 While reviewing their SOPs the night before, Charlie Company, 4th Platoon was instructed to set up a patrol base.

Despite how well each platoon is prepared there will always be something unplanned that occurs. That is what happened to Charlie Company, 4th Platoon.

“We continued the commander’s intent and set up out patrol base outside in order to fulfil the mission,” said Kailey Campbell, a Cadet from Salve Regina University.

When they completed the orders that were given, they found out that they did not have a tent. Even though not having a tent could be considered unfortunate, they were told it was not supposed to rain, but the rain fell. 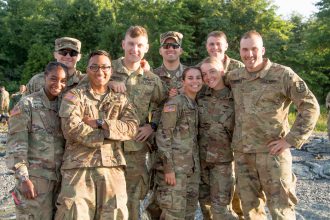 That is not how 4th Platoon had planned for the night before conquering their field training, but 4th Platoon did not let that rain on their morale. They believe that it made them stronger and ready to take on FTX.