Basic Camp 1st Regiment Cadets participated in Drill & Ceremony to begin learning how to operate as a unit.

Sgt. 1st Class Alonzo Banks, who oversees Alpha Company, explained what Drill & Ceremony is and why it is important to teach to the brand new Cadets, “Drill & Ceremony helps build a core within the unit. It’s also used to move from your element, from one location to another location in an expedient manner. Being able to keep command and control over the entire unit while in movement.” 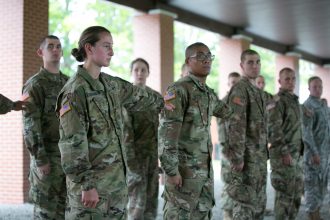 Cadet Weston Landon, who attends the University of Arkansas-Fort Smith, described the day in his own words. He said, “Today we are going over ceremonies, marching, and how you are supposed to stand and salute your commanding officers.”

Landon, a native of Van Buren, Arkansas, continued by explaining their procedures and how they got help from fellow Cadets. He said, “They are making us practice, having someone show us first and then we get to practice.”

Cadet Elijah Savoy, from Dallas, Texas, has a little experience with these procedures because of his time in JROTC in high school. He said his experience with JROTC was “pretty much the same with the marching, and that’s what we did today.” Savoy also attends New Mexico Military Institute. 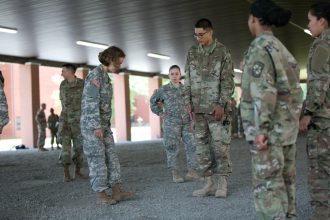 Cadet Laura Acebedo, who attends the University of Puerto Rico at Mayagüez, grew up in Aguadilla, Puerto Rico, and like most of her fellow Basic Camp Cadets, this is her first time learning about marching, or drill and ceremony. Although she is new, she said, “They are preparing me very well. I feel like I am getting a little bit more knowledge right now for my future.”

She, along with her fellow Basic Camp Cadets, have a lot to learn in their 31 days here. But they all seem eager to continue learning about the Army and their role in it.