Fort Knox, Ky. – Cadets give up a lot to be here at Advanced Camp. One Cadet is missing time with his son and watching him to grow.

Cadet Alexander Graham is from Gainesville, Florida, and is attending the University of South Carolina. The 5th regiment Cadet enlisted in the Army in 2015 after earning his undergraduate degree in business.

“I joined the Army after getting an undergraduate degree because it was tough to find work at home and I come from a military family,” Graham said. “My father was in the Army and retired after 20 years, my brother is currently serving in San Antonio, Texas. I felt some type of pride in an organization that has been around for a while, knows how to work and give me a good career path.”

On top of needing a job, Graham also joined because his close tie to his father.

“My dad has always been my hero. I just followed his footsteps and wanted to be something he could live up to. My dad retired as enlisted Army personnel, so for me to be an officer is something I feel like he is going to be even more proud of. I will be the first officer in my immediate family.

Graham moved up the ranks to achieve the rank of a sergeant before becoming a Cadet. While in the service, Graham worked in medical services an an x-ray technician.

“It was always the plan that I was going to come in enlisted and get a job that I could do outside the military as a trade as far as being an x-ray tech and then commission over after being in the Army,” Graham said. “I am attempting the green to gold path, active duty option, which is the program that I am in right now.”

Graham said this experience is different for him because of his wife and son.

“August 22 I will have been married for four years and my son was just born this past fall, October 3rd,” Graham said. “It is actually pretty difficult to not see him.”

Graham is sad about the time he is missing with his eight-month-old as he begins to walk and talk.

“To me some of the most important stages of his life are when those first teeth are growing and first started trying to walk as I left,” Graham said. “He is barely saying dada but just saying it.”

During his time at Advanced Camp, Graham got to celebrate his first Father’s Day, unfortunately, it was without his family. 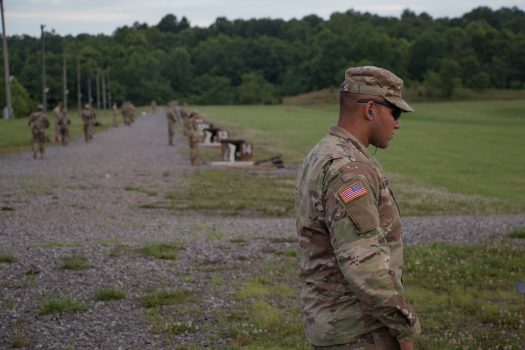 Cadet Alexander Graham, from the University of South Carolina, waits to complete his Weapons Qualification on June 24 at Fort Knox, Kentucky. To qualify with a weapon, Cadets must shoot at least 23 of 40 pop-up targets during the qualification. | Photo by Reagan Zimmerman, CST Public Affairs Office

“It was tough not getting to see him on Father’s Day but I have a lot of battle buddies and peers that make sure I am okay and look out for me,” Graham said.

Despite missing his family, Graham is making his way through camp and is looking forward to seeing his family.

“It is difficult being away from family but since I have been on active duty, I have had to be away from my wife, my son just got here, but I’ve been away from my wife for a little bit at different points in time,” Graham said. “I have good peers here who wished my happy Father’s Day and make sure I am alright.”

Graham is most looking forward picking up his young son for the first time since leaving for camp.

“They will not be coming to graduation because my wife is unable because of her work. When I get done with Advanced Camp, I am going straight back home to see them,” Graham said. “I can not wait to pick up my son, that is going to be the best. He is my little man. He is very close with me and when he sees me he gets excited. There is no love like the love for your kid. You hear it a lot but when you have a kid you think ‘I would do anything for them.’ So it will be the best thing to be able to hold him and get a hot meal.”