Cadets were required to complete three variations of the rappel tower; the slight incline, the wall and the open face rappel. They were meant to not only teach the Cadets but test them as well. 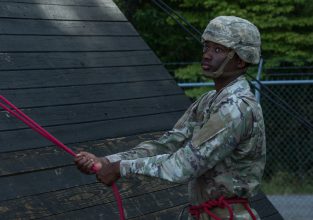 Cadet Kewanis Rucker, from Texas A&M at Central Texas, acts as a belay for the slight incline wall during 5th Regiment’s rappel training on June 27 at Fort Knox, Kentucky. Cadets are trained and tested on their rappelling skills by completing three different rappels; the slight incline, the wall and the open face rappel. | Photo by Reagan Zimmerman, CST Public Affairs Office

“Each one is building up off of what we previously did,” Cadet John Manning, from Overland Park, Kansas, and attending Marquette University, said. “The slant tower is to make sure we know the basic skills. The wall side is so we can prove that we know what we are doing, and the real test is the open side because you don’t have anything supporting you. It is all [about] your skills and the belay that is below you.”

Cadets came away from the training with new found personal courage and trust that their equipment will work properly.

But today, the rappel tower was not all about gaining trust and personal courage as an Officer.

For Cadet Cayce Giblin, from Dublin, Pennsylvania, and attending Bloomsburg University of Pennsylvania, today’s rappel training was about bridging the gap between Soldiers and Officers.

“[We do this] so when we take charge of a platoon, we are more in touch with the enlisted side because they do all this stuff at basic [training]. The fact that we are doing it here kind of brings us closer to them and we get an understanding with them,” Giblin said. 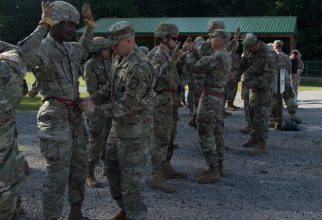 Cadets from 5th Regiment get their swiss seats checked by Cadre during rappel training on June 27 at Fort Knox, Kentucky. Cadets are trained and tested on their rappelling skills by completing three different rappels; the slight incline, the wall and the open face rappel. | Photo by Reagan Zimmerman, CST Public Affairs Office

Cadet Spencer Gareiss, from Warsaw, Indiana, and attending Arizona State University, saw the training as an opportunity to show integrity as a future leader.

“[It is about] leading by example,” Gareiss said. “By doing it with courage in front of your peers, it shows your integrity as a leader.”

Not only the rappel training, but Advanced Camp as a whole, is designed to give Cadets practice in real-life, high-stress situations, with the goal of developing strong leaders.

“Everything we do each day builds and improves your confidence for the overall goal,” Giblin said.

Teamwork, It Takes a Village

Me, myself and my buddy team