Fort Knox, Ky.–1st Regiment Cadets at Advanced Camp were reunited with loved ones on Family in the midst of graduation tomorrow.

Nearing the end of their time here at Fort Knox, some of the Cadets reflected on their journey and experience. 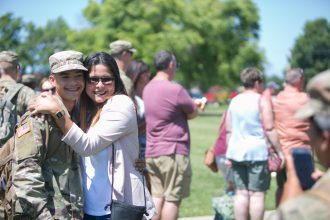 Cadet Jacob Stedleim, who attends Virginia Tech, said, “I’ve definitely learned a lot more than I thought I would. I kind of came in thinking we were just going to get evaluated and I wouldn’t learn a lot tactically. I even learned more about myself leadership wise, but at the end of the day I learned a lot about tactics and my own leadership style. I’m really glad to be done because it is a long 38 or 37 days.”

The Fairfax, Virginia native, continued by speaking about whether or not he accomplished his goals. He said, “I did, my individual goal was to do the best I can and rank as high as possible, and I think I accomplished that. There were things that I wish I could’ve done better, but at the end of the day I am still proud of what I accomplished.”

Cadet Daryeon Buhl, is representing Grambling State University, he expressed what he was most looking forward to after graduation. He said, “Leaving Fort Knox and going to CTLT (Cadet Troop Leader Training) at Fort Bragg to train with the 82nd.”

Buhl, a native of Fontana, Calif., said he accomplished all of his goals for camp, including the Call for Fire. “I thought it was going to be harder, but I was a first time go on that, so that is one accomplishment that I conquered.” 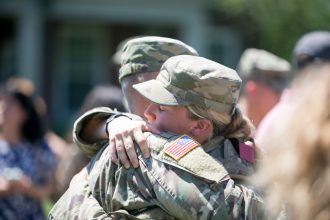 Lastly, Buhl spoke on the difficulties he faced while in camp. “I would say the hardships, the field, doing patrol and having early wake ups like zero three to twenty-two hundred every morning or everyday, so yeah. MRE’s, yeah it sucks.”

Cadet Nicholas Yearwood attends Newberry College and is from Rock Hill, South Carolina. He said it was quite the growing experience. “My experience at camp was amazing, like this is the most that I’ve learned since ROTC, Army related or anything.”

Yearwood said he appreciates the relationships that he has developed here at camp. “I have built some really great relationships, a variety, there is a lot of diversity in the platoon. We all got along very well, and there were some pretty high-speed Cadets and a little bit of low drag. The relationships were just built real tight. I feel like they will last forever.”

With 1st Regiment’s time at Advanced Camp winding down, the Cadets seem eager to graduate and move on to be the future leaders in America’s Army.

When You Set Your Mind To It – The Burpee Challenge