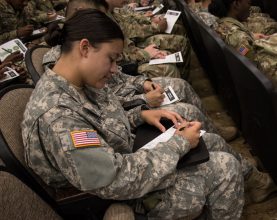 Performance training is for Cadets to gain the fundamentals about how to be successful in whatever they pursue. Guevara taught the Cadets the different types of motivations.

Guevara described the four different types of motivation in this case for ROTC were scholarship, the fear of letting someone down, being an officer is the best way to get success in the military and family legacy or wanted to serve their country.

Many Cadets choose the success route. Cadet Sofia Copat, who attends University of Missouri, was one of those cadets and she said it won’t change any time soon.

“I’m motivated because of a specific job in the military and everything I’ve done has worked up to this,” said Copat. Copat hopes to be part of a Civil Affairs unit once she completes college and commissions.

“I went to the success group because I believe if I come here and succeed I will be able to go back to my unit and tell them how I succeeded,” said Carlisle.

Carlisle is also a family legacy. Although he is a family legacy he chose the military because of his father telling him that the Army would be the best job he will ever have.

“When you’re a platoon leader or squad leader it’s important to keep your people motivated,” 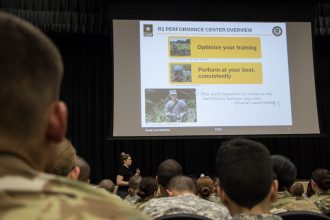 Some people view military members as people who are just born to be leaders.

“I really appreciate that the military is more than just equipment and getting smoked out,” Copat said. “They are teaching you how to take in the vitamins to be successful and taking the attitudes that will make you more successful.”

Another thing that will lead to success is the attitude of the person. “Attitude outweighs any talent or physical ability,” said Copat.

According to Copat, success is up to the beholder, and no one can be given success they have to have the attitude, have the confidence and the motivation to go after their dreams.