Fort Knox, Ky. – Cadets from 8th Regiment arrived yesterday and geared up today for the upcoming training events that make up Advanced Camp. 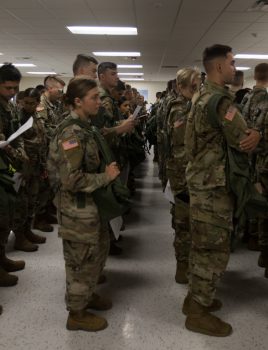 “I am pretty excited,” Cadet Reilly Andresen, from Brookings, South Dakota, who attends South Dakota State University, said. “We are on day two so we haven’t done a whole lot yet, but we are about to get into it all.”

The Cadets went through Central Issue Facility (CIF) where they received gear they needed and inspected their bags for deficiencies in their equipment. The goal of the day is to ensure Cadets are prepared for Advanced Camp and are ready to hit the ground running.

“It is important to go through all our gear because we are about to go out in the field,” Andresen said. “We need to make sure we all the things required to complete our missions, our rucks, and all the different task they are going to put us through.”

The Cadets all have different favorite pieces of equipment for the summer.

“My favorite piece piece of equipment is probably the poncho liner, affectionately known as the ‘woobie’ to everyone,” Andresen said.. It is super comfortable and when you have to make your bed in the mornings in the nice military style, if you sleep with your woobie on top, you don’t have to redo it.”

Cadet Mitchell Braun, from Raleigh, North Carolina, who is a student at Virginia Tech, said he appreciates his camelback.

“It is easier than carrying a canteen around and we always have to have a water source,” Braun said. 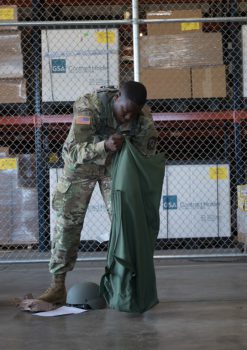 “Personally, my MOPP gear [is my favorite] because it can protect me from any kind of nuclear, biological or chemical attacks for it is very important,” Okereke said.

While Cadets enjoy getting to have some of their favorite equipment to go through Advanced Camp with them, a few Cadets had pieces they will miss over the summer.

Braun wishes he had a portable camp chair with him for Cadet Summer Training.

“I could sit on it instead of on the ground all the time,” Braun said.

Being in the Army for over seven years, Okereke doesn’t have anything he will miss, but speculates that for most Cadets the separation from their phone will be difficult.

“Looking at the social culture today, the cell phone is a part of everyday life. Not being able to have access to it is difficult for some people.”

Regardless of equipment they like or dislike, Cadets are excited to begin Advanced Camp. 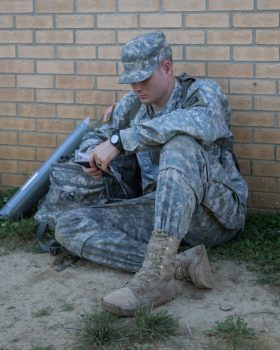 “It is an awesome opportunity to get to meet fellow Cadets from all the other schools. I am looking forward to getting things going,” Okereke said.

Stay in Your Lane