Lt. Col. Bryan Dunker spent the morning of June 22 in Point Mugu, California, 2,000 miles away from his South Carolina home. He swam 1500 meters in the wide-open Pacific Ocean, biked 40 kilometers along that same coast, and ran 10 kilometers through harsh winds to the finish line of the 2019 Armed Forces Triathlon Championship.

The Armed Forces Triathlon Championship is an annual event that brings together all branches of the military, and those passionate about the sport. Dunker, a professor of military science (PMS) at Wofford College, won second place in the Master’s Division, and celebrated with his fellow Army teammates on their overall first place win.

Dunker’s passion for sports began at an early age.

He grew up swimming and competed for his division one team at Lehigh University. Through his joining of ROTC, running came into the picture. Before he knew it, his love for the multi-sport bloomed, and so did his discovery of All-Army Sports.

“It took me ten years to get to this level,” said Dunker. “It was always a long shot.”

As a husband, father, athlete and PMS at Wofford College, time management is key to Dunker’s day-to-day life. 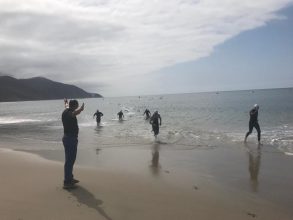 Lt. Col. Dunker runs out of the Pacific Ocean alongside fellow competitors, having completed the 1500 meter swim, and starts his transition to the next event of the Armed Forces Triathlon Championship, at Point Mugu, CA., on June 22, 2019.

When asked how he finds time to train alongside his daily responsibilities, Dunker answered with, “That is the million-dollar question – work, family, life balance.”

His training starts early in the morning at 4 a.m., before physical training. That extra early start, gives him time with his family later in the day, and available mind space to focus on his Cadets.

“I often get asked, ‘What is the key to success?’ My answer in a single word is discipline.” Dunker explained his love for endurance sports and their inherent challenge, “It’s a great feeling to strive for new thresholds.”

From Dunker’s perspective, Army ROTC and his triathlon experience work alongside each other.  They are mutually beneficial in promoting athletic ability, consistency and a deep-rooted love for challenges.

Dunker’s view on the relationship between the two was, “Where I see the synergy is really being a role model for them [Cadets], pushing them to expand their capabilities.”

He is able to use his triathlon training to help push his Cadets to their full potential. “Elevating the intensity, elevating the standards has paid off, and I think the Cadets are getting behind that for sure.”

US Armed Forces will send six men and six women to represent Team USA in the CISM Games in October of this year. Dunker will be one of those men and will compete for a chance to push himself even harder, and showcase his determination on the world stage.