Monday morning, July 1, brought 8th Regiment Cadets their first real day of Advanced Camp training. In-processing over with, it was time to get into the nitty gritty of the U.S. Army.

TC3 brought them that grit.

How to Save a Life 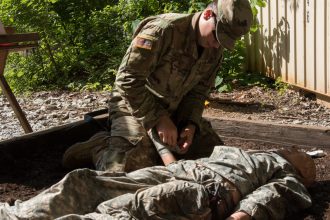 “We do a scenario where they take fire and their battle buddy goes down,” Lt. Col. Danielle Rodondi, professor of military science at Augusta University and the Officer in Charge (OIC) for the TC3 event, said.

These Cadets practice putting in a nasopharyngeal airway, dressing an arm and chest wound as well as checking for fractures and burns, Rodondi said.

“They suppress the enemy fire, then they have a massive arterial bleed in their leg and they put on a CAT (Combat Application Tourniquet) and simulate bringing them out of fire where they will simulate tactical field care.”

They’re training to save lives.

Each Cadet learns in their own way, just as each Cadre member teaches in their own way. From the lecture style instruction to the hands-on training, the TC3 event ensures that each Cadet will learn the information in as many ways possible. 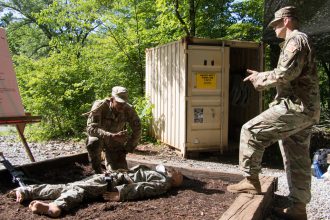 Cadet Demetrius Freeman, from the University of South Carolina, listens to advice and instruction from Sgt. Brandon Robertson as he goes through his hands-on TC3 training at Fort Knox, Kentucky, July 1. | Photo by Megan Reynolds, CST Public Affairs Office.

Freeman’s instructor, Sgt. Brandon Robertson, stood out, he said. Robertson demanded the Cadets motivate and encourage each other, Freeman said. It was a beneficial part of their training.

Cadet Brady Lucas, from Lexington, South Carolina, found the hands-on training to be the best part of TC3 training.

“I’m a very hands-on person, I learn by doing,” Lucas, who attends The Citadel, said. “Being able to, before we were tested, go step-by-step with the sergeant correcting us and giving us some guidance, doing it myself, was the best part.”

One group of Cadets training at TC3 this morning had a motto: “August 3.”

August 3 is the day 8th Regiment Cadets graduate; it’s the day they can go home. 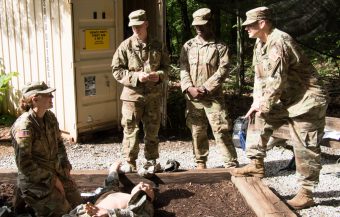 Cadets were given the opportunity to work with lane Cadre in a hands-on training session following their lecture style brief on the process of administering TC3. Fort Knox, Kentucky, July 1. | Photo by Megan Reynolds, CST Public Affairs Office.

“It kind of just boiled out one night, while we were waiting on the word, to say the least,” Freeman said. “Someone just said, ‘our motto should be August 3,’ and everybody dove on it.”

Freeman says their motto has a “sense of motivation.” The thought of going home to his wife and daughter keeps him going. When asked if there was anything he wanted them to know, he said “I love them, hopefully I’ll see them soon.”

Freeman is not the only one finding motivation in their motto.

“August 3 is our graduation date, so it’s kind of our rallying cry,” Lucas said. “I’m just waiting to see my family.”