The first two objectives, including gathering intelligence and performing reconnaissance on the base as well as capturing the base from the opposing forces, were executed with precision, according to Capt. Talisa Dauz.

“They knocked it out of the park. It’s probably one of the best missions we’ve done so far,” said Dauz. “Once they attacked the enemy, they were able to seize this terrain and the mission. They are currently on defense to keep the enemy from enveloping on the objective.”

FTX is a test of leadership for Cadets, allowing them to determine what kind of leaders they are in times of stress, a job bequeathed to the second lieutenants with the regiment. Newly commissioned second lieutenants are often able to connect with the Cadets, having been through training and camp in their recent years. 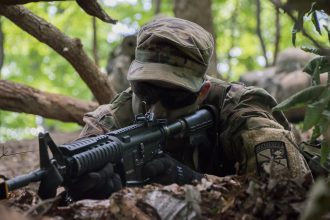 “They’re really teaching us and telling us how they were in camp last year and how they’ve changed and developed in that final year in college. Most of them say that, during Advanced Camp, they really found their true leadership because that’s what’s out here to do, to determine how you lead other people,” explained Cadet Paul Wallenhorst, from the University of Louisville. “Most of them said how they just help us talk through what kind of leader we are, whether we’re quiet, micromanaging people, or the loud boisterous who is out front always barking orders. They try to help each individual find what leadership style they use.”

2nd Lt. Madyson Green stated, “Because we were just here last year, we’re not too much further in it than they are. I’m able to take my experiences from my camp time and use that to help them. I know some of them, it’s definitely helped them.”

This connection and ability to relate to Cadets demonstrates a relationship and an easier flow of information as Cadet Shanesha Blair, of Grambling State University, explained. 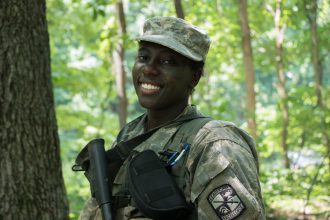 “Their presence is helpful because they went through the same experience. It helps us understand we’re not alone,” stated Blair. “They see the struggles we go through and some of the similarities that they went through, so they’re able to give us some pointers on how to become better at tactics and break it down into one order.”

Second lieutenants strive to instill essential lessons that will serve Cadets through their remaining time at Cadet Summer Training and on through their commissioning.

“Personally, I really just want to work on their communication, and then when they work together, they can build trust with one another. They can do that by slowly learning what everyone is capable of and trying to develop other to make others more capable in all fields,” said 2nd Lt. Alexander LaDue. “Once they do that, they build trust as a team. Once they build trust as a team, they’re able to work as leaders and actually able to understand and move their units around individually.” 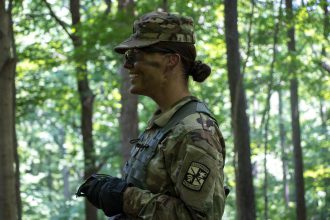 “I would say communication is the big thing that they need to work on and something I’ve seen people struggle with. Not just communicating itself, but communicating effectively and with tact,” added Green. “It’s something a lot of people struggle with and I think that it is one thing they can work on here, being able to work with peer on peer. Talking to people who are the same rank as you is a really good start before they get into a unit and they’re talking to people with higher rank and higher status.”

Finally, Dauz offered a piece of advice for Cadets who will be commissioning and second lieutenants about working at Cadet Summer Training.

“Take that opportunity. There are a lot of opportunities in the Army, but for brand new commissioned second lieutenants, this is probably one of the better things they get to do minus going directly to BOLC (Basic Officer Leadership Course), especially if they’re going combat arms,” she said. “They may get a lot of good experience out here getting better at tactics and understanding the decision-making that goes behind it that they didn’t recognize as a Cadet. If they have the opportunity, come be out on a team.”

Being a Cadet is not a Walk in the Park