Basic Camp Cadets participated in Drill & Ceremony to hone their skills in a formation.

Drill Sgt. Matt Archer, from the 8th Brigade, 95th Division, explained what they are being taught. “Currently what we are going over is proper wear of the uniform, followed by D and C. Which is just basic movements form.”

Drill and Ceremony is an event that was introduced to the 2nd Regiment Cadets on Day 2 of Basic Camp. 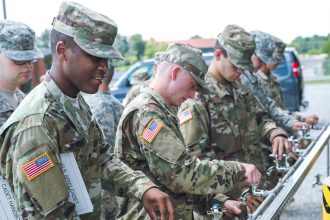 2nd Regiment, Basic Camp Cadets refill their canteens during a break from Drill and Ceremony instruction at Fort Knox, Ky., July 1, 2019. Drill and Ceremony is taught to all Soldiers and Cadets in order to lay a foundation of discipline and procedure. | Photo by Kyle gallagher, CST Public Affairs Office,

Cadet Dylan Deston, who attends University of Massachusetts Dartmouth, said that Basic Camp has been a culture shock for him. His Regiment has done Drill & Ceremony every day since they have been here. “ Today is day six … It has taught me discipline, its tough, and it may take some time but we will get there.”

With the drill sergeants arriving yesterday, Deston said, “It’s an experience, its different. They definitely try to instill that discipline into you. Some of us still have some work to do.”

Cadet Magdalena Crescenzo, who attends UCLA and is from Los Angeles, California, has enjoyed the beginning of Basic Camp. “I had worse expectations for it. It is not as bad as what I thought it would be.”

She continued, “It’s really nice to have that slow introduction. So, it’s been pretty good so far, and I have good expectations for it.” 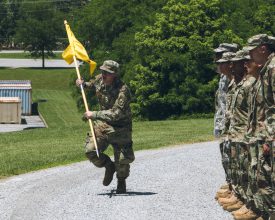 Cadet Matthew Dies, from Georgia Military College, posts the guidon for his company as he and fellow 2nd Regiment, Basic Camp Cadets prepare to recieve instruction on Drill and Ceremony at Fort Knox, Ky., July 1, 2019. Drill and Ceremony is taught to all Soldiers and Cadets in order to lay a foundation of discipline and procedure. | Photo by Kyle gallagher, CST Public Affairs Office,

When asked about how the platoons are coming together Crescenzo said, “They’re getting there. There has definitely been some struggles between certain platoons and whether or not certain people are doing the things they are supposed to be doing. But eventually everyone will get to the point where they can just flow together, and it’s nice to see that progression.

Cadet Aaron Abshire a student at the University of Maryland, and is from Waldorf, Maryland, spoke on his own progression goals. “I would love to mature as an individual and challenge myself.”

He said that he feels those goals will be accomplished with the help of his Cadre. “The drill sergeants are excellent. I can tell that they are being hard on us but also pushing us to be our best.”

As 2nd Regiment Cadets are still getting underway here at Basic Camp, they are finding their rhythm and progressing into the future leaders of our Army.