FORT KNOX, Ky. — Throwing live hand grenades is one of the most dangerous things Cadets can do, and so the Cadre make sure Cadets from 7th Regiment Advanced Camp are prepared before ever handling a live hand grenade. 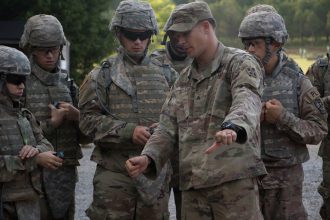 A Cadre member shows Cadets how to “sweep” off the confidence clip of a grenade at Fort Knox, Ky. July 3, 2019. | Photo by Jacob Hempen, CST Public Affairs Office

Cadets are brought to the Christensen Hand Grenade Range and begin to learn the safety procedures that are paramount to making sure that they stay safe. From the proper steps of arming to the action of throwing, Cadets go through this training upwards of 40-50 times, according to Capt. Jason Rivard.

Rivard, a Cadre member from California State University at Fullerton, said that Cadets go through many repetitions of the verbal and simulated throws before moving to two practice throws. After the two practices they move on to a “go or no go” throw to see if they qualify for the live range.

All of this repetition is important, Rivard said, “Because they get really nervous. So, a lot of them are really nervous with just the training grenades, which have just a little firecracker in it and it won’t hurt them at all. But they still associate that with a real grenade and think that it’s going to hurt them.”

Rivard noted that this nervousness comes from inexperience with grenades, but the Cadre are well versed with the explosives and make sure that the Cadets are prepared.

Cadre give guidance to Cadets after each dummy grenade throw to make sure Cadets know what to do when they are given a live grenade at Fort Knox, Ky. July 3, 2019. | Photo by Jacob Hempen, CST Public Affairs Office

“So, a lot of the Cadets have not touched a grenade, but all of our NCOs [Non-Commissioned Officers] they threw grenades in basic training so they have a little bit of training with that,” Rivard said. “Then we brought up Fort Benning Cadre and trained us for about three weeks before any Cadets showed up. So, we’ve thrown probably 10 to 20 each of the live grenades, and hundreds of practice grenades.”

All of this practice is a big help to Cadets, and not just ones who have never thrown grenades before.

Tyler Miner, a Utah University Cadet, has been part of the Utah National Guard for four, almost five, years and said that he learned some new tricks thanks to the Cadre. 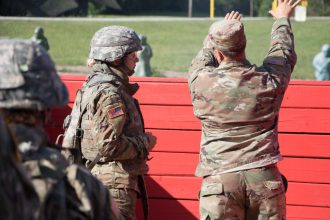 A Cadre member helps a Cadet with her throwing form after she throws her dummy grenade at Fort Knox, Ky. July 3, 2019. | Photo by Jacob Hempen, CST Public Affairs Office

“So, they [the Cadre] throw a little bit differently than what I have in the past and I think this is a better technique,” Miner said. “I like how they ran us through a couple of times and had someone there with us one on one. They had us go through a couple cycles before going down to the live bay.”

With Miner wanting to branch Armor after graduation means that he will probably see more explosives in the future. Just like another Cadet, Christian Lee, but the difference being Lee had never used a grenade before.

Lee, from Houston, Texas, noted that thanks to the Cadre’s instruction he, “Didn’t have a single worry going through.” 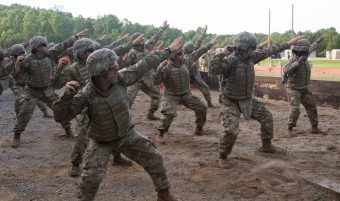 The Texas A&M University Cadet’s only disappointment was that it ended so quickly, and he had hoped for more. But thanks to the training and, with a little luck, Lee will reach his goal of branching Armor and will get to see a whole lot more grenades in the future.

Kyle Leblanc, a Worcester Polytechnic Institute Cadet, in the Transportation branch noted that even though he may not be called to use grenades this training was something that would be useful for all soldiers.

“I think it’s good training for any soldier,” the Tewksbury, Massachusetts, native said. “Honestly, it’s one of those basic soldiering things that everyone should know.”

The Cadre at Christensen know this and make sure that the training is easily accessible as Leblanc went on to explain.

“They are very knowledgeable and their step-by-step instructions definitely help every Cadet accomplish every task,” Leblanc said.

Cadet Andrew Ross, from Athens, Alabama, is another Cadet who may not be called to use grenades as he wants to branch Aviation. On top of that, he had never handled a grenade before.

Ross expanded on what his feelings were coming into the training, “Just a little bit [nervous] coming in, but after the training I felt I was good to go.”

Ross went on to explain why the training was so good for him and the rest of the Cadets.

“I thought it was awesome training,” the Marion Military University said. “They hit everything and I was very comfortable when I went to go through the live grenade.”

However, this training wasn’t all serious as one Cadet would later say.

Cadet Olujuwon Adepegba from Morgan State University had never thrown a grenade before but said that he wasn’t nervous at all coming in. Then after the training, he felt even more comfortable moving forward onto the live grenades. 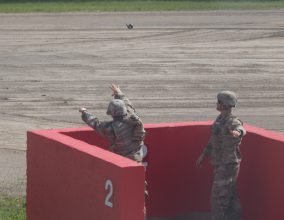 “Yeah, they gave very clear and concise instructions with some jokes in between which really helped a lot,” the Prince George’s County native said.

Hoping to branch Medical Services, Adepegba said that he thought that this was important training for any situation no matter the branch.

And for those coming in who may be nervous, Adepegba offered some advice.

“Follow directions,” Adepegba said. “If you’re at this point, you’re more than halfway done, so just keep your head on a swivel and don’t give up.”

When the Cadets go Marching in