“We prepare the Cadets to do what is called a buddy team live fire, which is basically moving and shooting with a fellow soldier,” explained Sgt. Matthew Rinen, an instructor on the range and . “It is meant to improve their confidence, teach them to communicate as a pair, move down a battlefield to an assaultive objective and ultimately throw a grenade.” 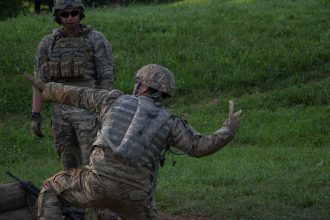 With cadre by their sides acting as safeties, Cadets move in pairs providing suppressive fire for each other while alternating movement down range. Wooden barriers and logs provide cover for Cadets while they fire and prepare to launch mock grenades.

Before shooting live ammunition, Cadets run through the buddy team live-fire event with blank ammunition. Cadre spend time ensuring that Cadets are confident in their maneuvering and communicative abilities before supplying them with live ammunition.

“Cadets shouldn’t be nervous at all,” said Rinen, assigned to the 2nd Infantry Brigade Combat Team, 4th Infantry Division. “Their speed doesn’t matter. Cadre are going to take them by the reigns and teach them the correct form so they have lots of practice.”

Cadet Maggie Brehm, attending Marist College, felt that she was well prepared to take on the range. 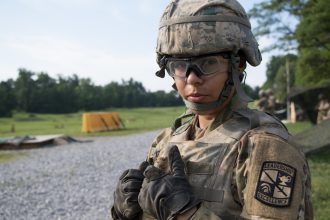 “I had fired a live weapon before camp but not in a military setting,” said Brehm. “Buddy team live-fire was  exactly what I expected since I’ve done it three times now. It was more nerve-wracking with live rounds but it was more realistic.”

“We were very well prepared for today,” said Cho.

Although firing live weapons is not novel for most Cadets, the buddy team live-fire experience was unique. 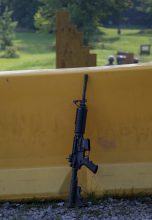 “I’ve fired a lot of weapons in my life but this is a really cool experience,” said Cadet Samuel Johnson attending Central State University. “It’s different because it’s a combat situation and you’re firing and maneuvering with a battle buddy.”

“I never know when I am going to be in a combat situation when I will have to protect the people around me,” said Hardy. “I will be able to think back on my Cadet training and what I need to do to keep my battle buddies and platoon safe. Since my soldiers will have been through this, it’s important that I also experience this.”

Why I Joined: Daniel Cole