FORT KNOX, Ky. – Cadets in the 3rd Regiment closed out their training time at Advanced Camp with the 12-mile ruck march this morning, July 3. 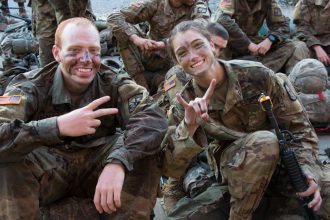 Cadets of the 3rd Regiment of Advanced Camp completed their 12-mile ruck march early this morning, bringing their training at Advanced Camp to an end. All that’s left now is a week of clean-up before they head home. Fort Knox, Kentucky, July 3. | Photo by Megan Reynolds, CST Public Affairs Office.

It was a victorious moment; cadences were shouted, hands were raised to the sky in triumph, smiles were plastered on every face. From Cadet to Cadet, words of encouragement were shared as they marched nearer and nearer to the “Mission Accomplished” banner that flew at their ending point.

With “Eye of the Tiger” playing, the 3rd Regiment crossed the finish line. Rucks were plopped on the ground as Cadets fell to their knees in relief.

From Field to Barrack

The 12-mile ruck march took Cadets from the field back to the barracks they began camp in. Seeing buildings rather than trees feels out of place, Webster said. Not only do buildings seem strange, but general interaction with people outside his regiment also feels out of the norm. 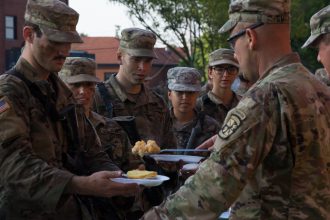 “I walked by and the one star [brigadier general] fist-bumped me,” Webster said. “And that’s when they started playing ‘Eye of the Tiger.’”

The fist-bump was Webster’s favorite part, but compared it to being in “the Twilight Zone.”

Ackerman is proud of the fortitude her platoon has displayed from the beginning of camp to now; coming together and fighting through it together has been a beneficial experience.

“It was a long four to five weeks,” Cadet Muave Sanders, from Cleveland, Mississippi, and attending the University of Southern Mississippi, said. “It was all worth it in the end.”

Sanders has found amazing networking opportunities at Advanced Camp. Meeting some “pretty cool people” has been one of the most beneficial parts of camp, Sanders said. Combining all those different leadership skills has opened up opportunities.

From Barracks to Home

While each Cadet is more than ready to go back home and eat “real” food, drive their car and sit down in front of a television, the thing they all seem the readiest to see is their family. 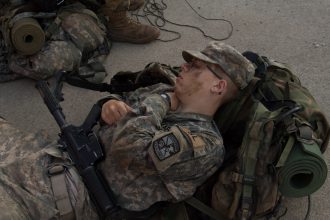 After marching for 12 miles straight, the Cadets were exhausted and ready for a nap. Many plopped their rucks down and used them as pillows. Fort Knox, Kentucky, July 1. | Photo by Megan Reynolds, CST Public Affairs Office.

“I’ve missed hearing my dad’s awful dad-jokes, my mom, hanging out with my brother and my sister-in-law,” Webster said. “The first thing I’m going to do when I go home is use the money I earned here to take my entire family out.”

Camp has caused Webster to miss birthdays and celebrations with his family, now he plans on making up for that. He’s excited to treat them all.

Sanders is also looking forward to some much-needed family time.

With a twin brother graduating with the 2nd Regiment of Advanced Camp, Sanders is excited to be able to finally get to spend some time with him once both have graduated.

Cadets of the 3rd Regiment of Advanced Camp completed their 12-mile ruck march early this morning, bringing their training at Advanced Camp to an end. All that’s left now is a week of clean-up before they head home. Fort Knox, Kentucky, July 3. | Photo by Megan Reynolds, CST Public Affairs Office.

“The first thing I’m going to do when I get home is sit in my living room and play Spades with my family,” Sanders said.

“Once I leave here, I go straight to my institution to finish my research,” Cadet Mark Garcia, from New Haven, Connecticut, and attending University of Connecticut, said.

Garcia is researching earthworms and their effect on soil in Staten Island. Working with Yale, Garcia is hoping for at least one day of rest at home before he has to return to his research.

With the 12-mile ruck march over, the Cadets are left with one last week of Advanced Camp. Training is over, but now the clean-up begins.

From now until July 9, when 3rd Regiment graduates, Cadets will be cleaning all their gear, and ensuring it’s all in as good of condition as when they received it.

When all is said and done, camp days are on their way out, and home is on the horizon.

Pick a Few, Take a Leap