Fort Knox, Ky. – Second Regiment Cadets are closing out their time at Advanced Camp as they graduate tomorrow. Today the Cadets were reunited with family and friends whom they haven’t seen for the duration of their time here at Fort Knox.

Anxious and awaiting family members and friends filled Waybur Theater for a quick overview of Cadet Summer Training before being released to see their Cadets.

While family and friends received an introduction to Advanced Camp and learned of all their accomplishments, Cadets practiced on Brooks Field for their upcoming graduation ceremony tomorrow.

Right before noon the doors of Waybur were opened and the reunions began.

Cadet Nikola Milich, from Cleveland, Ohio, enjoyed getting to visit with family after time in the field.

“It is fantastic seeing my parents, my aunt and my girlfriend. It has been a long 37 days and I just happy to be here,” the University of Toledo Cadet said.

Upon meeting up with their family members, significant others, friends and those who came to support them, Cadets were able to reflect on all they have accomplished.

“My proudest moment was when everyone looked to me for help,” Cadet Jared Braiman, from Greensboro, North Carolina, who is a student at Virginia Military Institute, said.

“[I am most proud of] working with the people in my platoon and in my squad and the things we were able to do together coming from not knowing each other at all,” Hanlon said. 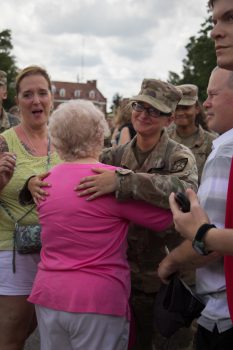 Between spending time in the air conditioning, seeing family, and eating food that is not a Meal Ready-to-Eat (MRE) Cadets have a lot to look forward to.

“Just overall completing Advanced Camp, it is a big milestone for us Cadets. It is good to be done,” Hanlon said.

Cadets are not the only ones proud of their achievements from camp, family members and friends were also excited to show their support and pride.

“He has taken charge of his own life, seeing my son grown up into the man he has and the young officer that he is soon to be is the greatest honor any father could have.”

As the 2nd Regiment Cadets graduate tomorrow and become another step closer to commissioning Braiman offer the advice to “be a good leader.”

Hopefully Cadets will head this advice as they prepare for their futures as officers.

The OPFOR are all for it