“The confidence course is a set of obstacles you have to maneuver yourself through,” said Cadet Sarah Toomey from Marquette University. “It tests your ability to trust yourself and also to trust the people around you, because they’re all safeties there to catch you. It’s a lot of stuff with heights and climbing, things I am scared of, so it definitely puts yourself to the test.”

There are many obstacles throughout the course that require Cadets to climb, grip, and crawl their way through. Often, Cadets try to encourage one another so each can reach their full potential on the course.

“Encouraging people isn’t just about trying to push them over an obstacle or help them through it. It’s kind of like when you do community service,” explained Cadet Ted Rohrer from the University of Dayton. “When you’re cheering people on, not only does it help them, but it also helps you and tells you that they trust you and they have faith in you as well.”

Cheering on fellow Cadet mates and encouraging them is only one part of bonding the unit as a whole. Pushing fellow Cadets to perform the best they can is essential, but so is recognizing where they can push themselves and where to draw strength.

“My physical strength I draw from all my experiences from high school as a track athlete,” explained Sara Wulff from the University of Massachusetts Boston. “My mental strength definitely comes from people that I’ve met and the experiences I’ve had, not only through the Army, but also through college. My spiritual strength I draw from my faith and, I think, a lot of the times you have to reflect on what is the bigger picture.” 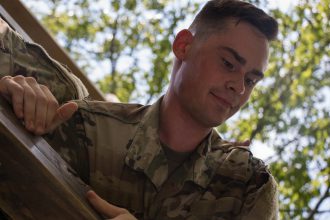 Cadet Nick Steinkamp, University of Central Missouri, climbs up and over one of the vertically challenging obstacles at the Confidence Course during Cadet Summer Training at Fort Knox, Ky. Photo by: Madison Thompson

This strength and encouragement combination between individuals pushed one Cadet through a personally challenging obstacle called The Weaver.

The Weaver, as Cadet Nick Steinkamp explained, is “set up in a pyramid shape with these beams about a foot or two apart and you have one beam you have to go under and the next beam you have to go over. Then you go over and under until you reach the top. Then you have to go back.” It forces Cadets to maneuver themselves up and over each beam as the height increases steadily.

Cadet Mengyao Sherren from the University of Texas at El Paso stated that The Weaver was a personal favorite as well as a challenge, “because I didn’t think I was able to do it. We practiced at school and I tried it before. I was definitely unable to do it every time I tried. But, over here, I did it with the support of my team.”

After completing the Confidence Course, Cadets shared their thoughts about Cadet Summer Training as well as a few insights into what can be helpful for other Cadets in the future.

“You have the option to be a leader and a follower. They’re both just as important. As a follower, you learn to support your leaders and it’s through learning to support them and help them be successful that you learn to be the best leader, because then you look out for your

followers and I think that’s how summer training helps people grow,” said Steinkamp. “It gives you the opportunities to be both a leader and a follower.”

“Breathe and trust yourself,” said Toomey. “They wouldn’t put obstacles up here that you wouldn’t be able to do or at least attempt to do.”