FORT KNOX, KY. – “I learned during my cycle that not everyone learns the same or can get talked to the same [and] not everyone has the same attitude,” said Calli Van Gorden, from the University of Vermont, “I learned that you have to adapt to the people you are with in order to be a confident and good leader.”

After 37 days of hard work, Cadets from the 2nd Regiment Advanced Camp graduated and some earned the rank of Second Lieutenant. 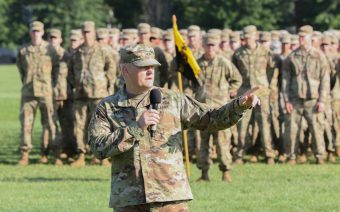 Before Evans spoke, 16 Cadets were awarded the RECONDO Badge. In order to achieve this, Cadet must score 270 or higher on the APFT, with a 90% minimum on each event; score 90% or higher on the written Land Navigation; find 5/6 points on day and night Land Navigation; receive a “Go” on all First Aid, CBRN, and Call For Fire tasks; complete the 6-mile foot march (with a 35-pound rucksack) in 90 minutes or less; qualify as a sharpshooter or expert marksman on their first attempt, and have no founded disciplinary action.

“You have to stay positive. You have to be the type of person that is glass full to get your whole platoon into the right mindset, get them moving and motivated.” Van Gorden said.  This was something else she learned from Cadet Summer Training (CST).

Van Gorden is currently anMS3 trainer, so she will stay in Fort Knox until August working with Basic Camp Cadets. She returns to school for her final year and hopes to branch Aviation and go to flight school.

The biggest challenge for her during CST was getting over here fear of heights when she went down the Rappel Tower. She said, “it was smooth sailing” other than that. 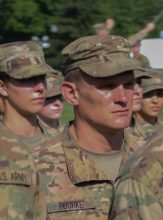 Cadet Jesse Boehm, from Michigan Tech University, said his next step is to leave for Guatemala on July 9 for Cadet Coalition Warfighter Program, formerly known as CULP-Cultural Understanding Leadership Program. Boehm said, “It is really nice to be moving onto the next step to something a little less intense.”

In Guatemala, he will spend a week training with the Guatemalan military, then some community service and a little exploring at the end.

The hardest part for Boehm was the mentality of CST. He said, “you are out there for days in a row, soaking wet. Just waking up every morning and sucking it up while trying to perform your best while all of that other stuff is happening. It is nice when you have everyone around you going through the same thing.”

Cadets from the 3rd Regiment Advanced Camp will graduate July 9.

Seeing in the Dark

Zeroing in on Skills