Fort Knox, Ky. – Motivation to complete Advanced Camp comes from different places for each Cadet. Today, during the group and zeroing range 8th Regiment Cadets share motivation to train from celebrating the nation’s birthday together.

“There is no better way to celebrate this country than to be training and doing something for the purpose of this country,” Cadet Benjamin Thornton, from Mount Washington Kentucky, who attends Western Kentucky University, said.

Cadets were able to celebrate with traditional Fourth of July food, such as hot dogs and hamburgers despite missing family traditions.

“A few us of while we were falling asleep sat back and enjoyed the sounds of fireworks and imagining being with our families,” Cadet Griffin Murray from Pembroke, Massachusetts, and a student at Virginia Military Institute, said.

The Cadets used that motivation during the training event at Canby Hill Range to better prepare them for their upcoming weapons qualification.

“I totally enjoy being out here,” Murray said. “The chance to shoot and zero for the entire day is a really good opportunity. It gives us a greater chance to be accurate on the range tomorrow when it counts to qualify.”

For one Georgia Southern University Cadet, Akira Bechtel, this was his first time successfully zeroing his rifle.

“My biggest challenge was just zeroing,” the Richmond Hill, Georgia native, said. “This is the first time I have done it and got a good grouping. It is a good feeling to finally do what I came here to do.”

Along with his fellow Cadets, Murray takes the training seriously in anticipation of his future in leadership. 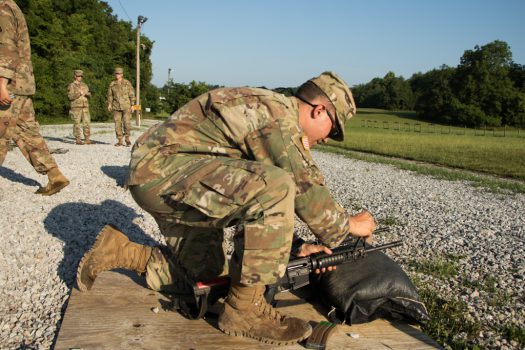 “This is my training for my job and career,” Murray said. “I am going to leading men in the world’s greatest military in the history of the entire world. My job is to focus and learn as much as I can to be prepared to lead them.”

Prior service Cadets David Greendwood from Lancaster, Pennsylvania, who attends Millersville University and Garret Griffin from Saint Louis, Missouri, attending the University of Kansas gave some advice to fellow Cadets.

“Don’t be nervous,” Greenwood said. “Do what you know how to do. When you start getting nervous is when everything starts to fall apart.

Griffin’s advice had more to do with listening and following procedures. “Listen to your Cadre,” he said. 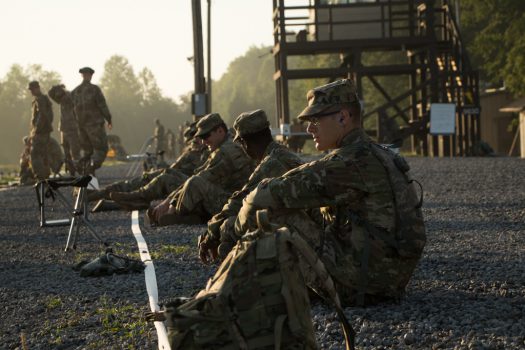 Eighth Regiment Cadets wait to take their turn at zeroing their weapon, July 5, 2019, at Fort Knox, Ky. Cadets spent the day at Canby Hill Range working to group and zero their rifles while getting feedback from Cadre. | Photo by Amy Turner, CST Public Affairs Office

Cadets hope to continue to spend time in the summer celebrating each other’s victories throughout their time in Advanced Camp.

A Nine-Line and a Little Time