FORT KNOX, KY.— “We do not know what our enemies are going to do,” said Cadet Alisha Anderson, a student at Brigham Young University-Idaho. “They can go at us full force with weapons or they can [use] chemical or radioactive weapons. As Soldiers, we need to prepare [for] everything so we can be able to react quickly and efficiently so we can help people around us.” 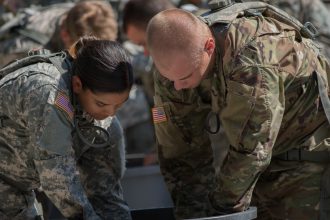 The next step for the 1st Regiment Basic Camp Cadets is to dunk their masks in several tubs of water to rinse the chemicals off the masks at Fort Knox, Ky., July 5. | Photo by Matthew Billiot, CST Public Affairs Office

Should our enemies use those weapons, the Cadets from the 1st Regiment Basic Camp are better prepared to defend themselves with chemical suits and masks after their initial CBRN training today.

Cadets learn to properly don their mask in under nine seconds, put on their suits in nine minutes and break the seal of their mask while in the gas chamber. Cadets sang “Old Town Road” so that they can endure the chemical reaction of the chamber.

Anderson had ease going into the chamber, because she knew so many before her have gone through, succeeded and survived. She said she can use her experience to help those who are anxious to get through the chamber. 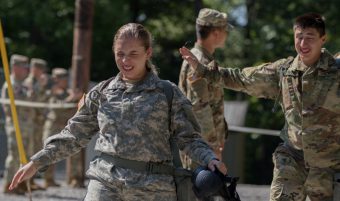 After exiting the CBRN Chamber, 1st Regiment Basic Camp Cadets Alisha Anderson, from Brigham Young University-Idaho, and Victor Loredo, from Missouri Western State University, flap their arms up and down while walking and must open their eyes in order to dissipate the gas from the CBRN Chamber at Fort Knox, Ky., July 5. | Photo by Matthew Billiot, CT Public Affairs Office

While in the chamber, Anderson said it is important to remember you are not alone.

A CBRN equipment instructor, 2nd Lt. Alexandra Ortiz, who will be stationed in Fort Riley, Kansas, said, “Chemical warfare is growing in general, it is more prevalent than you would ever expect and it is good to bring awareness to something of such magnitude.”

Cadet Ryan Borg, from the New Mexico Military Institute, reiterated the importance and said, “especially how the world is changing now in days, you will need to know [how to react during a chemical attack].” He feels that it is something that will be a bigger threat in the future than previously. 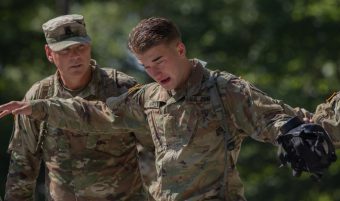 After exiting the CBRN Chamber, 1st Regiment Basic Camp Addison Hurt, from the University of Hawai’i at Mānoa, flaps his arms up and down while walking and must open his eyes in order to dissipate the gas from the CBRN Chamber at Fort Knox, Ky., July 5. | Photo by Matthew Billiot, CT Public Affairs Office

At first everything felt fine for Borg in the chamber. He said it felt like there was a sunburn on the back of his neck. That feeling eventually made its way down to his arms and that is when he knew he was really in the chamber.

Borg was excited for the confidence chamber, because someone in his squad got a cold and many of his squad members caught it, too. After going through the chamber he said, I am breathing perfectly clear right now.”

His advice to future Cadet is to think, do not panic and just breathe.

Cadet Addison Hurt, who attends the University of Hawai’i at Mānoa, said, “Everyone makes it, it is not as bad as everyone makes it out to be. Each day is a new day[and] the only easy one was yesterday.”