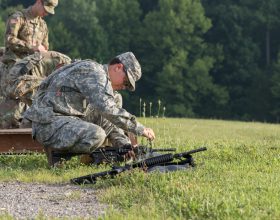 “Today is about establishing familiarity with the weapon [M4 rifle],” said Sgt. 1st Class Jeremy Smith, a cadre member at Riley Range. “The objective of group and zero is for Cadets to safely shoot a weapon and hopefully zero.”

From a prone position, Cadets zero their iron sights on a target 25-meters away using the front and rear sight posts on their rifles for accuracy.

For many Basic Camp Cadets, firing a live weapon is a novelty. Cadet Kendyl Dowery fired her first live weapon at group and zero. 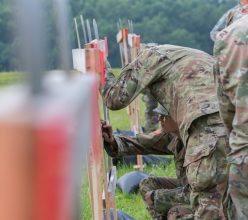 “I’m a little bit nervous,” said the Winston-Salem State University Cadet. “I’m sure I’ll get instruction and someone will help.”

Cadre stand by Cadets as they fire their weapons to ensure safety and to give instruction. After each iteration of five shots, cadre examine Cadets’ grouping.

“I improved as I continued shooting because the lieutenant next to me was helping me along the way,” said Cadet Dan Gehrz attending Saint John’s University.

Gehrz fired a live weapon twice prior to Basic Camp and he anticipates future opportunities.

“It was fun,” said Gehrz. “I am looking forward to shooting again.” 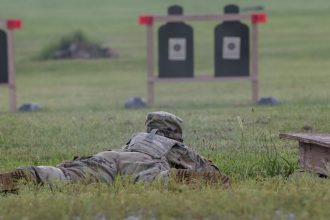 “I wasn’t in the black [of the target] at first,” said Cadet Jermayah Benjamin attending Augusta University. “I made a few adjustments and I eventually got it.”

Benjamin had fired a pistol before Basic Camp but was nervous firing an M4 due to its larger size.

“Once I shot the first two rounds, I calmed myself and started shooting better,” said Benjamin.

Regardless of whether they have prior experience firing live weapons, Basic Camp Cadets will be well trained in their shooting abilities. Smith suggests that enthusiasm and resiliency will aid Cadets through training.

“Have a willingness to understand and when things start to get hard, don’t give up,” advised Smith.