FORT KNOX, Ky. – Basic Camp, 2nd Regiment Cadets went back to the basics of Field Craftsmanship to prepare them for the Field Training Exercise (FTX) later in the Cadet Summer Training at Fort Knox, Ky., July 6. 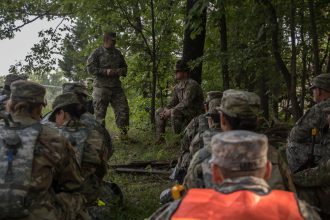 Field Craftsmanship helps prepare Cadets to be able to live in the FTX lanes for multiple days. Cadets learn the fundamentals of how to camouflage their gear and themselves. Along with how to set up camp to protect themselves from the elements around them. Alongside the camouflage and shelter, the Cadets learn how to pack their ruck in a way that has the important things toward the top of the ruck.

Cadet Glenn Montgomery, who attends University of Central Missouri, said he learned to pack his ruck like everyone else in the platoon because when its 2 am and too dark to find what is yours, you’ll end up picking up the first ruck you find.

Cadets find out real fast that it’s no longer about just themselves but also about the rest of the platoon.

“We go in as a team, we can fall as a team,” Cadet Travis Tack, from Murray State University.

Field Craftsmanship II course is to help build the confidence of the Cadets that they can do the FTX lanes. Tack explains that it helps Cadets feel like they don’t go into the [FTX] lanes unknowingly, but they go in with skills and training making them confident in themselves. 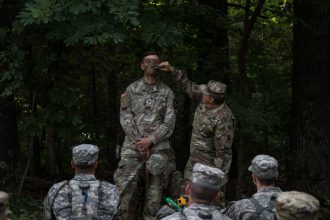 Cadre member demonstrates to Basic Camp, 2nd Regiment Cadets how to properly apply their camo paint to their faces. Cadets need to know how to apply their camo properly for when they go to the Field Training Exercise (FTX) lanes later in the Cadet Summer Training at Fort Knox, Ky., July 6. | Photo by Jordyn McCulley, CST Public Affairs Office.

“[Field Craftsmanship] is a building block course, each of the steps we have them go through is a planned building block to help them bring up their confidence in themselves and their abilities,” Master Sgt. William Jacobes, Instructor at Capital University said.

The building block method is good for the Cadet who have never been in this type of environment. It helps guide the Cadet.

“This is a really good first step toward where I want to go,” Montgomery said. “I’ve never really done any of this except doing physical fitness with my school.”

Whether your college prepared you for Cadet Summer Training or your brand new to the entire thing always keep an open mind.

“Even if you know stuff and your school prepared you, come in with an open mind,” Tack said. “The Cadre here know what they are doing, this is their job.”

On the same page