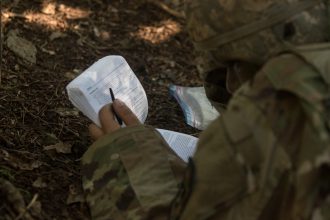 Once the platoon understands the strategy, the team rolls out. While they are walking the platoon leader keeps checking their location to make sure they are going in the right direction.

There is a group of OP4, a group of Cadets that pose as the enemy to help the Cadets going through CST learn in the FTX lanes. OP4 will attack the platoon and the platoon must call out “Contact.” As a team they must work together to eliminate the threat.

Once the threat is gone squad leaders check their Cadets equipment do a Liquid, Ammo, Causalities and Equipment (L.A.C.E) report and the exercise will end. Cadre then bring the Cadets together and have an After-Action Report (AAR).

Cadet Jacob Garrett, from Seton University in New Jersey, was the platoon leader for the first un-controlled move to contact FTX lane.

“There were a lot of positive things that came out of the AAR,” Garrett said. “One thing the Cadre focused on was communication which didn’t just fall onto me it fell onto the whole platoon.”

Communication is a crucial tool in the military. Cadets are expected to communicate with the other people in their platoon by hand signals, radios and verbal communication.

They could be a great strategist but if communication isn’t there it could end in causalities. 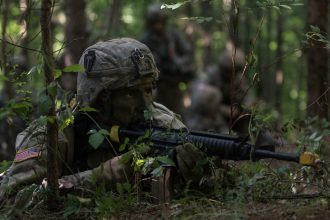 “It was a tough run,” Cadet David Thrasher said. “It was our first uncontrolled lane as a platoon and the movements and communication just wasn’t quite there; however, the planning and tactics were great from top to bottom.”

The Cadre give the Cadet the information they need to know to start planning. All Cadets have a Ranger Handbook with different tactics and strategies they are able to use.

Cadet Justin Bruntt, from Charleston University, believes that if you read the Ranger Handbook to a tee and constantly read the book the more you will understand the tactics.

Along with the handbook the Cadre at Cadet Summer Training are there to help guide the Cadets in the right direction.

“Our Cadre said I had a really good thorough plan but it was the execution that was just fuzzy,” said Garrett.

Throughout CST Cadets are put into a leadership positions and graded by the Cadre on how they do.

“I was a little nervous at first but you have to remember at the end of the day you have subordinate’s underneath you, delegating jobs can help the leader in the long run,” said Garrett.

After every exercise the leadership rolls are acquired by someone new. Cadets spend a few days on the Panther FTX lanes before moving onto the Grizzly lanes.