“Branch orientation is a day the Cadets come and learn about the branches of the Army and what each branch has to offer them,” explained 1st Lt. Michael Neilan. “They figure out what they want to do with their military career. That’s what today is all about.”

While some Cadets have already made their branch selection, many Cadets utilize the opportunity to listen to cadre who are in the branch, whether it be part of the infantry, military intelligence, cyber, among many others.

“I’m really excited getting to go around, looking at all of the potential branches I could be placed in. I definitely have my top choices though,” said Cadet Lily Connolly from Texas A&M University. 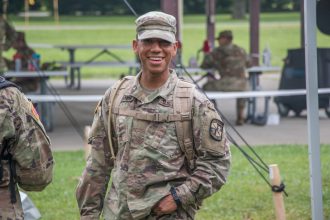 While considering the different career paths before them, some Cadets asked themselves pointed questions when selecting a branch.

“I would say the first one would be can you see yourself doing it? Can you enjoy that job?” said Cadet Edgar Hernandez from Central Washington University. “Second would be, and this is more for the reserve component people, is can you transfer those skills you learned in the Army over to the civilian sector? The third one is are you passionate about the branch?”

Other Cadets considered personal passions and long-term happiness in a position.

“I think that the most important thing is what you’re passionate about. Also, what you can see yourself doing for a long time. Third, probably, what you can see yourself doing outside of the military that could translate well into the civilian sector just in case the military doesn’t work out after a couple of years or you decide you want to transition into the civilian world,” said Connolly. 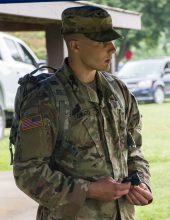 “The biggest thing that you should be concerned about is are you happy doing what you do and do you feel like you have a purpose doing that job,” explained Cadet Jared Grato from James Madison University. “The second thing that I would consider is the type of environment you’re going to be working in. Are you suitable for that job? Are you suitable for that position? The third thing is whether you want to stay close to home or whether you want to go active and give yourself some breathing room and just travel.”

Two commissioned officers offered their perspective, having selected a branch not too long ago and what they considered personally.

“Where you’re at in your life. If you’re a 22-year-old Cadet, you want to jump at every opportunity you could possibly be given. You want to choose a long-term picture for a career. Twenty years seems like a long time, but it’s not. It’ll be gone before you know it,” stated 2nd Lt. Matthew King. “Finally, what you’re comfortable doing. What you physically want to do. Are you physically capable of doing infantry? Are you mentally able to do cyber or MI? If you want to live life on the real hard edge and do this space program they have now, it’s whatever you feel you’re capable of doing.”

“The first thing they should consider is life after the military. You’re not going to be in the military for your entire life and if you can do something that can set you up for a career after the military I think that is extremely important,” stated Neilan. “Another thing to consider is what you went to college for. With your college degree, you should find a job in the military that coincides with the branch you want to do to the best of your abilities. The third is pick something that makes you happy. The military asks a lot of people and asks a lot of their family. So, as long as you find a branch that makes you happy and you’re not 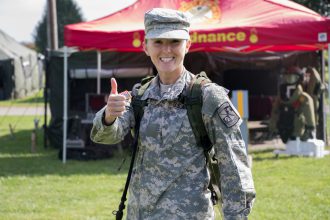 just doing it for status or because someone told you to do it. Make sure you’re doing what you want to do. The military affords you every opportunity to do anything, but you have to work for it. Don’t get stuck.”

Finally, Connolly offered a piece of advice for Cadets in future regiments which helped her through all of CST.

A New Life: Enlisted to Commissioned