FORT KNOX, Ky. – Cadets of the 6th Regiment of Advanced Camp entered into their third day in the field this morning, July 6.

Spending their days in classes, these Cadets are preparing for their next FTX (Field Training Exercise) site where they will be leading ambushes and attacks.

“It’s going. It’s hot, but it’s going,” Cadet Alexis Molina, from Schererville, Indiana, and attending Purdue University, said. “So far we’ve taken a bunch of classes, just refreshers before actually heading into our big FTXs where we get evaluated.” 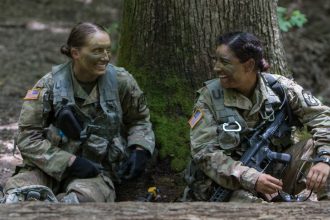 Molina’s platoon went through their first field mission today, giving them a chance to show their Cadre what they know.

“It was pretty successful, minus the five of us Cadets who quote unquote died,” Molina added with a laugh.

“It was an experience, I didn’t expect it at all,” Corpuz said. “They came right at me.”

Corpuz said she was waiting with safeties, but missed the enemy coming up on her right. It’s a lesson learned for next time, but she still enjoyed getting to go through the mission.

Corpuz hopes to branch Infantry, so the missions they do in the FTX give her an idea of what she may be doing one day. 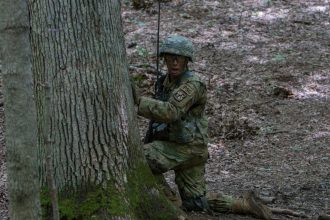 A Cadet gives instructions to others in his platoon as they take on enemy fire. Fort Knox, Kentucky, July 6. | Photo by Megan Reynolds, CST Public Affairs Office.

The FTX isn’t solely about tactical training and classes, though. Platoon chemistry is also stressed while Cadets are out in the field.

Working with all different sorts of people allows you to gain an insight into other leadership styles, Pantalion said. Camaraderie within a platoon is great, but being able to learn from your peers’ leadership is the biggest benefit of being in the field, she added.

As necessary as the FTX is, every Cadet has their own field pet peeve; there’s always something that just grinds your gears.

“Honestly, just walking everywhere,” Molina said when asked what irks her the most. “I don’t mind walking, but it’s just the fact that I have no other option of transportation.”

Her statement was full of laughter. Molina said she knows that walking is a weird field peeve to have; sometimes she just wants a break.

The pet peeves don’t stop there. 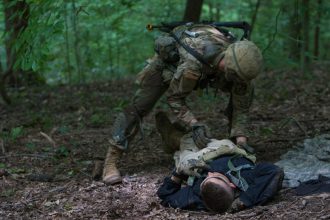 Wet socks absolutely disgust Corpuz, who joked about losing her mind in the field. Between suffering through squishy, wet socks and constantly thinking she has bugs crawling on her, Corpuz recommends future Cadets bring extra socks and bug spray.

For Pantalion, it’s the toilet paper in the port-a-johns, or lack thereof.

“We never have toilet paper in the port-a-potties,” Pantalion said. “That’s my pet peeve. We keep stealing toilet paper out of the MREs.”

Pantalion also finds it frustrating that everyone smells pretty bad out in the field, but she doesn’t mind that as much (mostly because she smells just as bad, she said).

The End of the Day 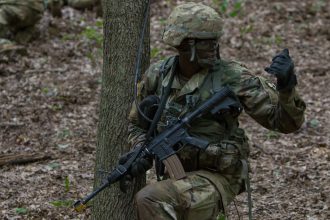 A Cadet gives instructions to others in his platoon as they take on enemy fire. Fort Knox, Kentucky, July 6. | Photo by Megan Reynolds, CST Public Affairs Office.

As much as the FTX can be the hardest part of Advanced Camp for Cadets, they also find this to be the most enjoyable part.

They are constantly in action, doing something to keep the time passing quickly. Before they know it, their time in the field will be over.

And then, camp will be over.

A Light in the Night