“The objective is for all the Cadets to qualify,” said Capt. Patrick Laine, a cadre on the range. “Before weapons qualification, Cadets were taught how to group and zero their shots. They learned to make adjustments based on how they hit a stationary target.” 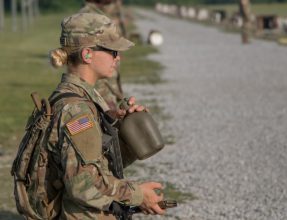 Unlike their previous practice rounds, Cadets shot pop-up targets from three different positions. Each iteration of weapons qualification began with Cadets lying in the prone supported  position, which provides the most stability and comfort. Cadets received 20 rounds to engage their targets from this position. The prone unsupported position and kneeling position are more challenging. The Cadets had a 10-round magazine to shoot from each of these positions.

“The kneeling position tends to be the most difficult position because it provides less stability,” said Laine. “It tends to be uncomfortable for Cadets who lack flexibility.”

Cadets kneel in a foxhole in order to shoot from this position. While shooting from the foxhole is generally challenging, some Cadets favor it above the prone positions.

“Surprisingly, I was better at kneeling than supported prone,” said Cadet Tyler McEvoy attending Purdue University. “Sometimes it goes your way and sometimes it doesn’t.” 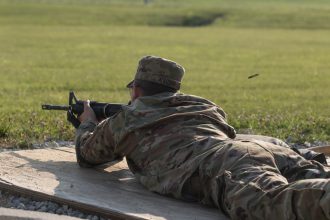 Apart from the challenges awkward firing positions offer, shooting at least 23 of 40 pop-up targets is the  standard for qualification. Cadets must meet this standard while accounting for a time limit.

“It [weapons qualification] was tough,” said Cadet Mason Wikoff from Baylor University. “There were some moments when my glasses fogged. I would get frustrated when I knew I missed a target. Overall, I am pretty happy and hopeful I will come out qualified.

Weapons qualification will inevitably present challenges for Cadets. The difference between success and failure is a clear mindset.

“Take your time on the targets, breathe and focus on trigger squeeze,” advised Cadet John Bailey, a student at Texas A&M University.