FORT KNOX, Ky. — 9th Regiment Advanced Camp Cadets got the chance to learn the terrain, test out strategies and knock off the Land Navigation (Land Nav) rust that built up after the spring semester ended at the Land Nav Refresher. 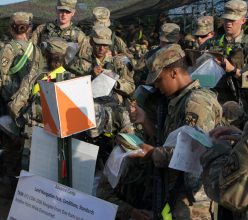 Cadets are given their maps and begin plotting their course to the points they have been assigned at Fort Knox, Ky. July 6, 2019. | Photo by Jacob Hempen, CST Public Affairs Office

Land Nav Refresher requires Cadets to plot and locate two points in two hours with a map, protractor and compass. This is meant to help simulate the actual test the Cadets will be facing the following morning.

However, this refresher is less strict, in that it allows Cadets to assist each other and ask questions of the Cadre. The hope being that this allows Cadets to try out different methods and strategies to figure out how they will fare during the actual test.

Cadets, no matter the experience level with Land Nav, were very thankful to get this opportunity to see what they would be facing.

Cadet Jake Rauenhorst, from Minnesota State University, Mankato, a prior enlisted soldier is no stranger to Land Nav. He had some thoughts concerning the refresher event.

“This event is important because we can actually go out and see the terrain we are going to be working in,” the Olivia, Minnesota, native said. “Also, this is a way to test ourselves to see where we are at with Land Navigation. If we don’t find both our points, hopefully we will be able to find them the next day.” 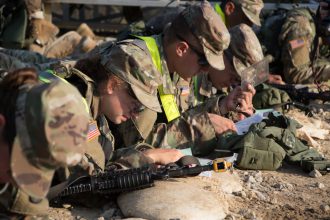 Cadets are given their maps and begin plotting their course to the points they have been assigned at Fort Knox, Ky. July 6, 2019. | Photo by Jacob Hempen, CST Public Affairs Office

Terrain, many would say, is one of the most crucial obstacles to factor when tackling any Land Nav course. Rauenhorst would echo this in his tips to future Cadets.

“The tip I would give future Cadets going through Land Nav would be to use the terrain,” Rauenhorst said. “There’s a lot of detailed terrain on the maps so you can use that to associate where your points are.”

Familiarizing themselves with the area was a huge help for Cadets, especially for those who may come from somewhere completely different to Fort Knox. Cadet Piper Seeley knows that challenge all too well.

A native of Prescott, Arizona, Seeley has spent most of her time training for Land Nav in a less forested area. So, while she may be comfortable with Land Nav in general, the greenery posed a real challenge.

“It is super green and when you’re going to out to find a point it’s really easy to get misplaced,” the University of Arizona Cadet said. “You really have to pay attention to the terrain features and where you’re at on the road.”

For others, it’s not the vegetation that poses a threat, but the humidity in the air and swampy ground.

Logan Berghoefer, a Pacific Lutheran University Cadet, said his school’s program does Land Nav about four times a year in the Washington woodlands. But vegetation wasn’t the problem Berghoerfer would find during the event. 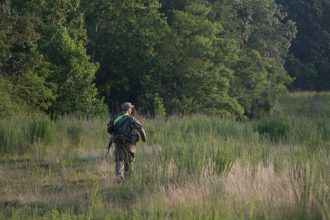 A Cadet makes his way out into the woods to find his assigned point at Fort Knox, Ky. July 6, 2019. | Photo by Jacob Hempen, CST Public Affairs Office

“Yeah it [Tacoma, Washington] is pretty forested and dense,” the La Plata, Maryland, native said. “This actually, in certain areas, is not that forested or dense with underbrush. This is definitely swampier. While we may have a lot of rain up there, it’s not as swampy and you don’t have to worry about walking through swamps and stuff like that.”

Berghoefer also took this opportunity to try out a new technique he had learned to see if maybe it would be of use the following day.

“So basically, my Master Sergeant taught me, you time how long it takes you to walk 100 meters and then you have that,” Berghoefer said. “Then you measure out the distance you need to go, you just start your timer and you calculate how long you need to walk. That way you don’t need to keep a pace count and you can have a sort of leisurely stroll. Sadly, I was a little bit off so it didn’t work, so tomorrow we’re going to have to go back to the basics.”

An unfortunate miscalculation but this refresher is built for Cadets to try these strategies out so they know what will help them the next day.

Cadet Nicholas Price, of Newport News, Virginia, is another Cadet who is familiar with one part of the terrain at Fort Knox, but is not so used to other aspects. 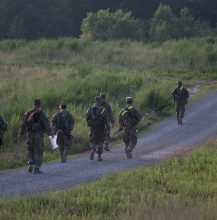 “The area is kind of different from what I’m used to,” Price said. “The area where I do FTX is very hilly, but the terrain here is relatively flat. Very wet, lots of puddles, and lots of wildlife and mosquitos. I was getting bitten up out there, and that’s something I’m not used to.”

The new challenges kept coming for Price because while he may not be new to Land Nav, the structure changes from university training to Advanced Camp training kept him on his toes.

“Also, with the courses themselves, something that was a big change for me was that, they aren’t self-correcting,” the Virginia Tech Cadet said. “Like at my school they have points, on the markers, where you can check on the map and you can plot to make sure you’re on the right spot. But these maps…aren’t self-correcting so if that’s not your point then you’re wrong. And if you try to go to your next point then that’s going to be all wrong.”

However, if you know the terrain and are used to wildlife, the refresher helps make sure you have your basics down like in the case of Cadet Rob Mathioudakis.

Mathioudakis noted that at his university, Indiana University, the Cadre really focused on Land Navigation during the previous school year.

Cadets take a moment at a checkpoint to determine their next course of action to find their points at Fort Knox, Ky. July 6, 2019. | Photo by Jacob Hempen, CST Public Affairs Office

“We did that pretty extensively last year because Land Navigation, I guess, has been a problem for some other Cadets who have come here in the past,” Mathioudakis said. “So I think our Cadre really wanted to hammer home Land Navigation this year.”

An Indianapolis, Indiana native, Mathioudakis said this terrain was very similar to the area around his home. He said it felt like a bit of a home field advantage and that he felt right at home. While that may have been a boon, the time between the end of school and this refresher still gave him something to work on.

“Honestly, it’s been a while since we’ve had the opportunity to do Land Nav,” Mathioudakis said. “I mean we got it in school in early May and now it’s July. So I think the refresher helps get you back in the mode, back in the swing of things. It’s like a warm up shot in basketball.”

Mathioudakis further stressed the point of getting back in the swing of things and using this course as practice in his tips to future Cadets. 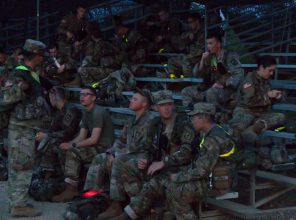 Cadets take time to relax and reflect on how their strategies worked before the Land Navigation test the following morning at Fort Knox, Ky. July 6, 2019. | Photo by Jacob Hempen, CST Public Affairs Office

“I would say definitely be smart about how you plot your points and manage your time,” Mathioudakis said. “I had two points that were on the exact opposite sides of the map, so trying to figure out what the best way to manage the time so you’re not back here with three minutes to go or not making the time cut was important. Be smart at what points you go for and how you manage your time.”

Crawling Through the Dark