During Cadet Summer Training the Cadets are the main focus, but there are also Active Duty Soldiers who spend their time developing these future leaders. 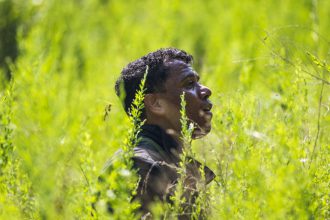 Staff Sgt. Joshua Garcia, a member of Opposing Force (OPFOR), positions himself in tall grass to be hidden during 5th Regiment Advanced Camp at Fort Knox, Ky, on July 7, 2019. Photo by Brody Haverstick.

During Field Training Exercises (FTX) there are active duty infantry Soldiers who work as the Opposing Force (OPFOR) against the Cadets. One unit in particular, 3rd Battalion, 21st Infantry Regiment have come to Fort Knox from Fort Wainwright, Alaska. For one day they let me observe them while they went through their procedures.

These Soldiers work in four-day shifts. They spend four days in the field during the day helping create scenarios for the Cadets. Then they get five days to recover before they are back at it again. 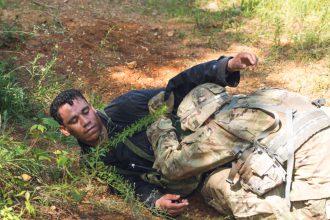 Staff Sgt. Joshua Garcia was walking through the woods as he described his main objective, “We cause a reaction for these Cadets. Then they will be assessed on how they react.”

Pvt. Lake Loveol expanded on what Garcia shared. “The objective of OPFOR is to train ROTC Cadets to be future officers in the Army. We improve their skills to react to contact at certain times.”

Loveol continued by speaking on his influence on the Cadets. “I feel like I impact the Cadets by being a simulation for them. We give them somewhat of a live look into what a combat or field scenario feels like.”

Spc. James Shaw described their typical missions. “When we’re on defense, then we defend our operation, and then when on the attack, the objective is to literally give them havoc – make them think. We put pressure on them to think the worst possible situation.”

The OPFOR are going to continue to help prepare the Cadets for their future careers by bringing out the best out of them through live confrontation.