Listen and Lead: A Lesson in Team Building

“We’re doing some team building events and obstacles. It’s basically not about strength, but thinking about how we can work together to get through these obstacles and how we can get everyone through it,” stated Cadet Asia Foster from the University of Kentucky. 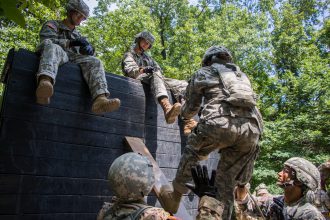 The obstacles, as Cadet Jacob Wakeley from the University of Kentucky explained, are puzzles where Cadets must get from one point to the next with all of the squad members as well as their equipment. Some obstacles require Cadets to climb over walls using planks of wood and pieces of rope while other obstacles require maneuvering around pillars with the equipment in tow.

Guiding and managing equipment through an obstacle is only one challenging aspect of TDC. The other piece is seeing if you can lead and listen to your fellow Cadets.

Another test of leading and listening is knowing if the course of action is the correct one and how to place people where they need to be, recognizing that others have greater skill in an area than you do as Cadet Thomas Warren from Augusta University explained. 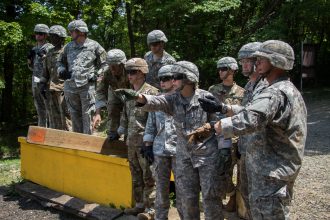 “(It’s) the fear of being wrong. You’re in charge of a dozen of your friends in this situation. Whether it be here or in another situation, you’re in charge of other people and, possibly, their lives; that is a heavy responsibility,” stated Warren. “Leadership is difficult because you’re making decisions for other people. How do you know if you’re qualified to do that? I’m not the best at any of this stuff out here. I have to direct people who are much better than me at it. I see parallels with anything that requires a leader. You’ve got to put yourself in charge of people who are better than you at stuff.”

The lessons taken away from TDC not only include listening and understanding one another’s tactical mindset, but also knowing some tasks cannot be done alone.

Cadet Asia Foster from the University of Kentucky jumps down from the obstacle after successfully navigating it. 1st Regiment, Basic Camp Cadets worked together on the Team Development Course (TDC) July 7, 2019 during Cadet Summer Training at Fort Knox, Ky. Photo by: Madison Thompson

“I think that assessing abilities is one of the keys of leadership because, without these guys

who are doing the job, you have no purpose as a leader,” said Warren. “You’re not the one doing the job. You’re the one who’s finding the best at it and getting them the stuff they need or the plan they need to accomplish the mission.”

After the exercises concluded, Cadets offered some advice for future regiments.

“Listen to your battle buddies and don’t step on anyone’s toes. Try to work together as a team as best as you can and keep the anger low. A lot of people get passionate, but you have to try to control that emotion as best as you can,” said Foster.

“Come in with an open mind,” stated Wakeley. “Things may look pretty simple and that there’s no set way, but there are multiple ways to go about it.”

Shootin’ Rounds and Slidin’ Around

The Beast of Beaudoin