Cadets of the 3rd Regiment of Basic Camp completed their intro to the M-4 Carbine this morning, July 8.

Taking them through the proper way to dismantle their weapon, the regiment drill sergeants taught Cadets where their gun would get the most grime, and where they’d need to clean a little more in depth. They were also taught the terminology of the parts of their M-4 Carbines. 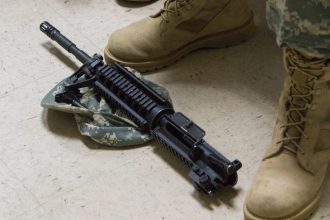 Cadets use their patrol caps to cushion and contain the smaller parts of their weapon once it’s dismantled. Fort Knox, Kentucky, July 8. | Photo by Megan Reynolds, CST Public Affairs Office.

“They’ve already taught us how to clear the gun, and I never even knew that,” Cadet Hailey Cook, from Houston, Texas, and attending Marian Military Institute, said. “I never knew the basic stuff at all.”

The benefit of the M-4 Carbine class is the experience gained, said Cook, who’d not handled the weapon before coming to Basic Camp. Leaning on the people she’s met here and what they know has helped her quite a bit.

The Basic Camp Low Down

“It just started getting real yesterday,” Cadet Tia Bell, from Washington D.C., and attending City College of New York, said. “The first few days are reception, after the fourth day, the fifth day, our drill sergeants come in and kind of wake us up, and introduce us to the Army.” 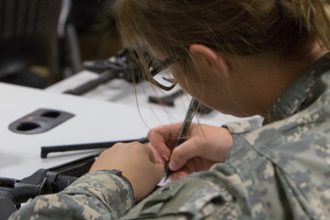 Cadets take notes and pay attention to the instructions their drill sergeants are giving them on the dismantlement of their M-4 Carbine. Fort Knox, Kentucky, July 8. | Photo by Megan Reynolds, CST Public Affairs Office.

Bell added that the drill sergeants have been really pushing them, showing them “what it takes to be a part of this organization [the U.S. Army].”

Cook and Bell both believe that looking at Basic Camp as practice for the next step, Advanced Camp, can be helpful to Cadets. Camp is meant to prepare them, so soaking in all information possible is going to work wonders.

“Just take it one day at a time,” Cook said after she was asked about advice to future Cadets.

Day by day, camp will pass, slowly but surely. Just enjoy it, even though it may be hard through the nitty-gritty.

Every Beginning Has An End