Fort Knox, Ky. – The stars were out; the crickets were chirping and 9th Regiment, Advanced Camp Cadets were rucking. 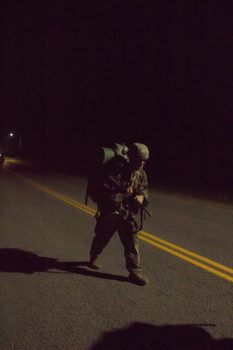 At 4 a.m. the Cadets were lined up and began the six-mile ruck march.

“It is good to be out here with all of my buddies, I have made some really good friendships thus far and I love a really good (physical training) session,” Cadet Dylan Vansickell from Little Silver, New Jersey, and a student at Stevens Institute of Technology said. “A six-mile ruck to start the morning [makes for] a good day.”

The Cadets used this time in a variety of ways. Some enjoyed the personal pacing and personal time for reflection while others bonded with battle buddies along the way.

Cadet Ethan Frimark, from the University of Toledo, was grateful for the push of a friend to help him reach his goal.

“I had Cadet Johnson, I was with him for a long time,” the Toledo, Ohio native said. “He motivated me a lot, I probably wouldn’t have made my goal if he hadn’t motivated me.”

“I personally like rucking alone, especially here where we are around people all the time,” Vansickell said. “There are times that you are able to sneak away and do your own thing, it is just about finding those little opportunities to maintain your mental health.”

Cadet Austin Heiselmann from Lake Geneva, Wisconsin said he mostly rucked alone but received encouragement from fellow Cadets he passed along the way.

“We move at our own paces so you are constantly passing people up, saying ‘hey what’s up’ and motivating each other as you go through,” the Rippon College Cadet said. 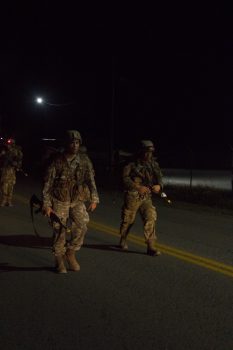 “The whole reason why I do this and do ROTC is to protect the people that I love and country that I love,” Vansickell said.

“[My biggest motivation is] how supportive [my family] is of me, I will be the first Army officer in my family in over 100 years,” Freimark said. “Being able to achieve that goal makes my family so important.”

Upon completing the ruck march, Cadets had a lot to look forward to, showers and even some hot chow.

“Most days I just look forward to eating, so when I crossed the finish line, I just wanted some chow,” Vansickell said.

For Heiselmann, completing the ruck is just another step towards graduation.

“Our platoon and our squad all have a calendar and checklist of everything we must complete or must pass for Advanced Camp,” Heiselmann said. “Every time we complete one we all cross it off our list and ‘x-out’ the day on the calendar.”

Different from a Baseball

Cadets unveil the meaning of CAPE