FORT KNOX, KY.— “I think learning what your subordinates have to do on a day-to-day, hour-to-hour basis makes you a better leader,” said Sophie Hill, from Wellesley College. 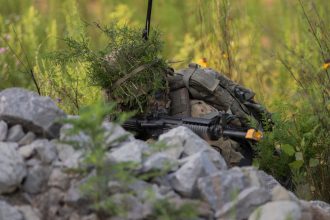 5th Regt. Advanced Camp Cadet Melanie Hammond, from Indiana University of Pennsylvania, scans her surroundings to make sure there are no opposing forces approaching this squad, at Fort Knox, Ky., July 8. Some Cadets put leaves and other brush on their helmets to better blend in with the woods. | Photo by Matthew Billiot, CST Public Affairs Office

Hill and the rest of the Cadets from the 5th Regiment, Advanced Camp completed another day of Field Training Exercises (FTX) and learned what exactly those they will lead have to do during this ambush mission.

At the start of the mission the Platoon Leader was given the details about the ambush the previous night and had until the early morning to plan out what would happen.

“When you are in the center and you are planning things, and you have all these things happening you forget that your Soldiers have been laying in prone for two hours protecting you while you are trying to make the plan,” Hill said.

Hill was the Alpha team leader of the assault team so they saw the enemy coming first and were the first to open fire. 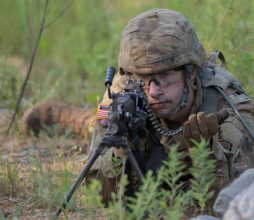 Cadet Braden Trent, from East Tennessee State University, from the 5th Regt. Advanced Camp scans his surroundings to make sure the enemy does not infiltrate the area, at Fort Knox, Ky., July 8. | Photo by Matthew Billiot, CST Public Affairs Office

She felt that they opened fire a little too early and that had a negative effect on the whole squad. She thinks they shot early because they were “all really excited to see the enemy coming down the road.”

Since Hill has always been outspoken, it was hard for her not to take charge today since she was not a leader. She said, “the most challenging for me was learning when to step back. [It] was a good reminder to stay in my lane.”

“There are responsibilities that I have and learning to operate in that framework without overstepping my bounds is a good lesson for me.”

Melanie Hammond, from Indiana University of Pennsylvania, said, “Even if you do not have a leadership role, you still have a role to play. If you are not playing that role, [there] is a chain reaction.” 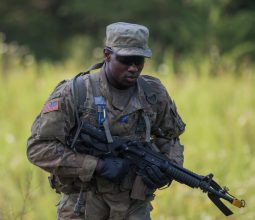 She continued saying, “In time of war, it does not matter if you are a cook or infantryman, you are going to have to be able to perform the same tasks. Everyone having the shared understanding of how to do it is extremely vital.”

“We have known each other less than a month and here we are doing complex Infantry assault,” said Braden Trent, from East Tennessee State University. “If that does not teach you to communicate quickly, I do not know what does.”

FTX is important according to Trent because, “this is teaching us skills that we can carry with us for the rest of our life, [such as] communication [and] leadership.”