FORT KNOX, KY.— “Shoot, move and communicate,” according to Cadet Ezequiel Zaragoza, from the University of Texas Rio Grande Valley, these are some of the fundamentals that 1st Regiment Basic Camp Cadets learn at the Buddy Team Live fire. 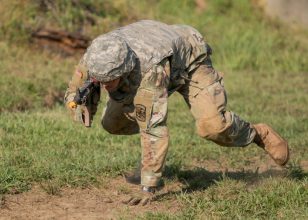 While running through the Buddy Team Live Fire practice, 1st Regiment Basic Camp Cadet Dylan Bollinger, from the University of Central Florida, drops down into a low crawl. This practice round prepares Cadets for the next day when they will use live ammunition during the course at Fort Knox, Ky., July 10. | Photo by Matthew Billiot, CST Public Affairs Office

This training prepares Cadets for when they go through this course again the next day with live ammunition.

Cadre would give Cadets different scenarios to add stress to the situation so that Cadets would know how to properly respond if the situation ever occurred.

Other than the importance of safety, Zaragoza said something that he has learned from this training is “slow is smooth, smooth is fast.”

Even if a Cadet branches infantry, finance, medical, etc. Zaragoza said, “It is very vital for every Soldier that [their] officers know this, because you have to have that key communication. You are a Soldier at the end of the day.” 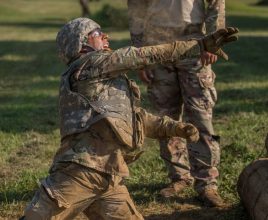 1st Regiment Basic Camp Cadet Francisco Rendon, from the University of Illinois at Chicago, reaches the end of the Buddy Team Live Fire practice round and prepares to throw a mock grenade. The next day, Cadets will use a live ammunition while running the course at Fort Knox, Ky., July 10. | Photo by Matthew Billiot, CST Public Affairs Office

Zaragoza mentioned it is key as a platoon leader for subordinates to be able to trust that you know what you are doing and eliminate any doubts they may have. “In order for you to be a leader, you yourself need to know how to do the fundamentals.”

The hardest thing for Cadets today was communicating with someone they have only known for 13 days, according to Zaragoza. When he went through Basic Training, he said he knew the drills and people better.

Vance McCloud, from Florida Institute of Technology, said, “Personally, I feel like a leader should never ask their subordinate to do anything they themselves cannot do.”

McCloud said the amount of dirt he ate was the most difficult part.

His advice to cadets is “listen to Cadre, be loud and practice violence of action. It is easy not to care about this while we are out here doing practice drills, but this is a profession of arms, so you never know when you will need any of the information you learned out here today.”