Cadets of the 9th Regiment of Advanced Camp completed their last day of M-4 Carbine training before qualifying this morning, July 11.

While they shot at the pop-up targets, a sensor was reading how their shots were moving and landing. This gave them what’s called “down-range feedback.” 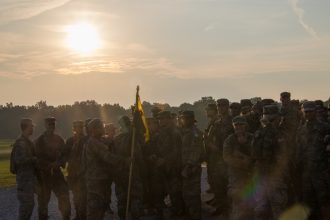 “They’re doing, essentially, a fixed-distance range,” Maj. Jason Martos, leading the 3rd Platoon of Alpha Co., said. “The computer will read where the rounds are impacting and allow them to confirm the zero they got yesterday.”

Cadet Tyler McCalister, from Rockwell, Texas, shot for the first time ever here at camp. Attending the University of North Texas, he said his university doesn’t get the chance to do much weapons training, aside from dismantling and reassembling their guns.

“Today, we got out and we got our ammo, and I was feeling good,” McCalister said. “When I went, I was a little nervous about shooting the 300.”

At the 50- and 100-meter marks, McCalister missed one target. At the 300-meter mark, McCalister only missed three, leaving him feeling quite proud of the work he did this morning. Being able to see that feedback and know where the shots he missed were landing was extremely beneficial, McCalister said.

Not every Cadet was as confident as McCalister.

“I am feeling a little nervous,” Cadet Deicy Acosta, attending the University of Utah, said. “My grouping and zeroing yesterday didn’t go so well. I just have to get that right position, though, and I’ll be good.”

The Salt Lake City, Utah native said she was looking forward to getting her down-range feedback. Analyzing her shots and having that visual input shows her how she needs to adjust. 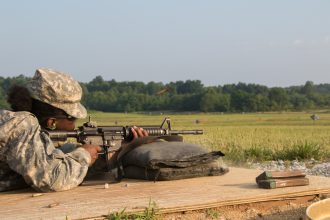 Excited that camp was finally speeding up, Tossavainen said he was happy to get out of the barracks and onto the range. The first few days drag, he said, and then training kicks in. “Going full in” has really helped his days go by, Tossavainen said.

Some didn’t feel like they were trudging through their days, though. Acosta was surprised when she was reminded that it’s day ten of camp.

“It’s been going fast,” Acosta said. “Once you’re in the field, time flies.”

Acosta has found that being able to look back on her days and realize how much she’s accomplished helps push her through Advanced Camp. 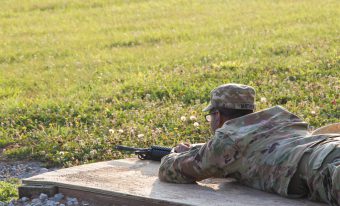 Cadet Kuriakose Mathew, attending Fordham University, awaits instruction from his Cadre while he takes in the view of the range in front of him. Fort Knox, Kentucky, July 11. | Photo by Megan Reynolds, CST Public Affairs Office.

These Cadets still have 27 days of Advanced Camp left. Tomorrow, they will qualify with their M-4 on the same range they practiced on this morning.

Soon, they’ll find themselves living in the field, time flying even faster than before, as they march towards the end of camp.