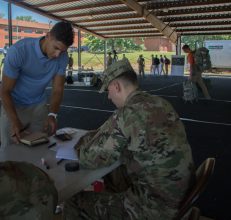 Cadet Andrew Gonzalez, from the University of South Florida, checks in and finds out what company he belongs to. Cadets arrive to start their journey at Cadet Summer Training at Fort Knox, Ky., July 12. | Photo by Jordyn McCulley, CST Public Affairs Office.

“I am a little nervous but [I am] getting through everything. We were all trained for this,” Cadet Lorenzo Robinson, from Northfield New Jersey, and a student at Norwich University, said.

During their 37 days here at Cadet Summer Training, the Cadets are given the opportunity to learn new skills and put their leadership to the test.

“I am excited about meeting new people and actually applying what I learned at school,” Cadet Jade Gillis, from Philadelphia, Pennsylvania, a student at Penn State University, said.

Cadets have either had three years to prepare as an ROTC Cadet at their university or received prior training through Basic Camp or Basic Training.

“Since my freshman year I have been doing ROTC every Tuesday and Thursday, making sure I am physically fit and prepared mentally,” Cadet Jeremiah Ham, from Toms River, New Jersey, and attending Drexel University, said.

Cadets are excited about various aspects of the upcoming training.

“Honestly, I really like to shoot guns so I am kind of excited for BRM (Basic Rifle Marksmanship),” Cadet Timothy Knuutila, from Gastonia, North Carolina, who attends Gardner Webb University, said.

Cadet Jacob Ruppert, from Franklin, Ohio, is excited to try out one of the new events added to Advanced Camp this year. 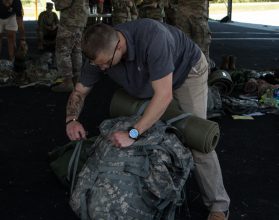 “[I am excited for] the Buddy Team Live Fire because it sounds really cool and is something I have never done. It is a new experience,” the Xavier University Cadet said.

“[I am most nervous about] probably messing something up [while] being in charge,” Knuutila said.

Robinson hopes his leadership skills are beneficial to those around him.

“I just want to make sure I do everything well and help people out,” Robinson said.

Regardless of what they are excited about, all of the Cadets are looking to gain the soldiering skills and leadership skills required for a future as an Army Officer.

“I am feeling pretty good. I am ready to get some training out of the way, and learn the skills I need to become an officer,” Ruppert said.