FORT KNOX, Ky. — 1st Regiment, Basic Camp Cadets completed a day of Field Training Exercises (FTXs) July 13 during Cadet Summer Training. For many Basic Camp Cadets, this FTX was one of their first experiences obtaining an objective in the field. 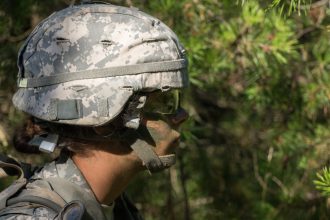 Cadet Maggie Nosek, University of Kentucky, explained that the Cadets moved in squads rather than platoons or companies, “because we’re in a smaller group and it’s easier to see everyone. This was our first time running through it as a group, especially in the woods like this.”

Cadets discussed during their After Action Review (AAR) that communication had improved from previous iterations as well as support for one another. Still, there were a few aspects that needed improvement.

“Some of the things we determined we need to work on was when we get to our objective rally point, we didn’t immediately go into our 360 degree protection. So, that was something we needed to work on getting faster,” stated Newman. “When we’re at our objective point, it should only be seven minutes and we were really pushing that seven minutes. Another thing was getting our L.A.C.E. reports faster.”

L.A.C.E. reports are an essential part of training and moving forward to the next objective.

“L.A.C.E. reports is an acronym. It stands for Liquid, Ammo, Casualty, and Equipment. So, we have to make sure you’re topped off on water. We have to make sure we have enough ammo or if it was wasted, if you did or did not shoot. Casualties are always important to see who was injured or didn’t,” explained Cadet Christopher Rivera Cotto, University of Turabo in Puerto Rico. “Last but not least is the equipment. You always have to have your compass and you weapon, all those sensitive items that you need.”

Moving forward with the remainder or their training, Cadets offered a few pieces of advice to future Cadets and regiments.

“Advice I have for Basic Camp Cadets or just anyone coming in, it’s okay if you don’t have experience. Don’t take it personally what the Cadre say to you because they’re just trying to prepare you for future. They want to see everyone who comes into the Army succeed,” said Nosek. “Also, listen and pay attention as much as you can because there’s so much information that we need to obtain and learn, but if you’re not focusing and paying attention, you’re not going to understand at all.” 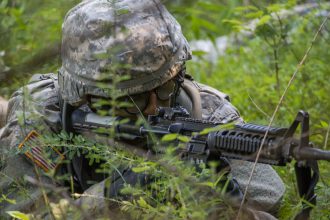 “Follow instructions and pay attention. Motivate yourself daily. Try to do your best. If you feel tired, push it out. You have more battle buddies to help you out,” stated Rivera Cotto. “Before being an officer, you’re a rifleman. So, you need to know what your subordinates already know. You need to be sharp on it. You need to be the best at it, because you lead by example. You lead by the front.”

It’s All in the Arm